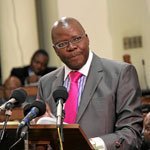 By Kudzai Chimhangwa FORMER Reserve Bank of Zimbabwe (RBZ) employees have enlisted the assistance of the Zimbabwe Insurance and Pensions Rights Trust (ZimPIRT) to ensure that they are paid sustainable pension payouts. The former workers said that Comarton Consultants (Pvt) Ltd, a company which administers the pension fund on behalf of the RBZ, has not been paying them sufficient amounts of money to sustain their livelihoods.

He confirmed that the former employees were getting paltry payouts averaging US$20 a month.

“The monies that members are receiving are absolutely ridiculous,” said Nazare. “The fund invested in shares, assets and other instruments over the years and we expected proper returns on those investments, only to be told there is no money, it’s really disheartening.”

Nazare added: “We are working with ZimPIRT to secure our full rightful benefits from Comarton and from other service providers.”

Comarton trustee Bart Mswaka said the complaints over non-payment probably emanated from lack of knowledge on what was meant to be done upon retirement. He said this was further complicated by the introduction of the American dollar from the local currency.

“The (low) payments have all been the result of the conversion exercise, which the finance ministry is currently looking into,” he said. “A whole lot of issues have complicated matters related to the conversion.”

The hyperinflationary period rendered Zimbabwe’s currency worthless, leading to the adoption of the multi-currency regime in 2009, a development that later morphed into confusion over which conversion rates were to be used.

Finance Minister Tendai Biti recently said cabinet was deliberating on an appropriate conversion rate to be used on the Zimbabwe dollar bank balances preceding the use of multi-currencies in 2009.

But he explained that the conversion exercise was a policy issue which his ministry could not solve alone.

ZimPIRT general manager Martin Tarusenga said the pension fund management companies were not acting in good faith because they would want the general public to believe that all the pension funds were liquid at the time of the conversion.

“Everyone knows there are different investment portfolios that these companies use including fixed assets,” Tarusenga. “The fixed assets did not lose any value but instead have appreciated so what happened to the pensioner’s money that was invested in fixed assets.”

Tarusenga said Biti must be commended for taking the first steps towards reining in corporate governance at IPEC and at insurance companies by reconstituting the IPEC board.

However, concern has been raised over conflicting interests of IPEC Board Members, to those of pension fund members and pensioners, leading to alleged pension and insurance rights violations.

In terms of the Insurance and Pension Commission Act, the IPEC Board serves to oversee the regulation of pension and insurance operations, with the primary objective being to protect consumers of pensions and insurance services.

Two banks on RBZ watch list
“Of the 19 operating banking institutions, 17 were compliant with the minimum prudential liquidity ratio of 30%,” the RBZ said.
Business
By Mthandazo Nyoni
Oct. 2, 2022

Interview: Nzenza: Buckle up for AfCFTA or collapse
The Ministry of Finance promulgated SI 98 of 2022 to complement the Ministry of Industry and Commerce’s mandate to protect consumers.
Business
By Freeman Makopa
Oct. 2, 2022

Don’t blame sanctions for bankruptcy, says expert
“You will find that all those companies in principle collapsed because of primarily bad governance.
Business
By Mthandazo Nyoni
Oct. 2, 2022

By Freeman Makopa Oct. 2, 2022
Interview: Nzenza: Buckle up for AfCFTA or collapse