Preserve the aura of Mana Pools 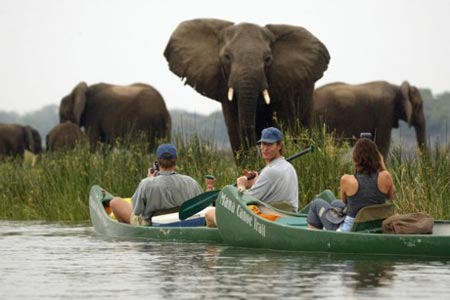 The above quotation, by Theodore Roosevelt, might be beginning to gain relevance in Zimbabwe.

A conflict is currently brewing over what environmental conservationists perceive to be an ongoing system that fulfils economic needs at the expense of the environment and tourism.

There is growing concerns that conservation and biodiversity areas that had for long been set aside for not only the financial benefit of the country’s tourism industry, but especially for the posterity of present and future generations, may be facing serious dangers, which many fear may spell out their demise.

The current bone of contention is a Unesco World Heritage Site, which encompasses Mana Pools National Park, Sapi and Chewore Safari areas. A locally-owned company was allegedly issued with a licence last year in September to undertake exploration activities for heavy mineral sand deposits (HMSD) in Ruckomechi and Chewore rivers. The extracted sands would consist of ore deposits yielding minerals such as thorium, titanium, tungsten and zirconium. Diamonds and other gems may also be discovered.

To get the deposits, experts believe two mining methods would most likely be employed; either dredging or suction (sucking up of the sand), or earth moving, which would involve actually moving the sand and trucking it away. The licences are said to have covered an area from the escarpment to the Zambezi River (65km from Chewore and 45km from Ruckomechi).

Besides the unavoidable damage to the flora and fauna that tends to take place when a project of such a nature is undertaken, mining in the area presents many problems.

The human traffic in the area, besides that of tourists and the Heritage Site employees, is bound to intensify the already problematic human/wildlife conflict as wildlife still thrives in the area.

There are currently serious fears that poaching activities may have greatly decimated the country’s wildlife, with elephants and rhinoceros being the main targets.

Mining activities in the rivers will also result in the water getting heavily polluted.

Furthermore, if mining activities in this area were to be given the green light by responsible authorities, it is bound to compromise the area’s standing as a World Heritage Site.

A place is considered a World Heritage Site if “it is a property of outstanding universal value because of its cultural and/or natural significance, which is so exceptional as to transcend national boundaries and to be of common importance for present and future generations of all humanity . . .”

There are 962 properties from all over the world on the Unesco World Heritage List.

By being on the list, it means the Mana Pools area is not important only to Zimbabweans, but to the whole world. This explains why there has been an outcry from people from different parts of the world concerning the intended mining venture and a plea to the government to put an immediate halt to it.

A Facebook page, which has since gained popularity (currently with more than 2 000 likes), has been created, called Save Mana Pools. Many that have been commenting on the page said they had visited the World Heritage Site and cherish the area. They expressed hope that their children would also be allowed the chance to enjoy the God-given natural resource.

But according to a well-placed source, the explorations, and possibly even the actual mining, might have long begun if it wasn’t for a late request for an environmental impact assessment (EIA). This brings us to the issue of EIAs.

According to the country’s environmental laws, any activity of such impact cannot be carried out before an EIA is conducted, to ensure that the potential impact of a proposed action upon the environment is identified and disclosed prior to a decision.

It then makes one wonder how it would be that a company that plans to mine in a World Heritage Site may be handed a licence to explore before an EIA is conducted and the results are available.

For the sake of preserving the World Heritage Site, its environment and the tourism benefits to be reaped through its thriving, I hope there is no truth to the allegations!