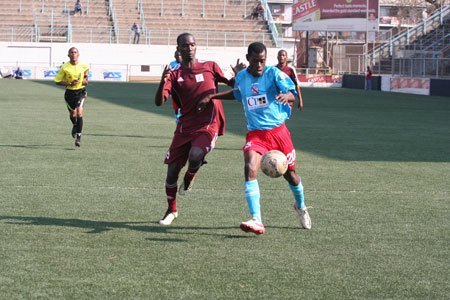 The statement above sums up the excitement of the 2012 season which was concluded yesterday with Dynamos lifting the Mbada Diamonds Cup.

This was after Dynamos piped Monomotapa at Rufaro. A week before, the team had beaten Highlanders to the 2012 Castle Lager Premier Soccer League championship on goal difference after both teams had been tied on 69 points.

Bosso flattered to deceive as they went on a record-breaking 23 match unbeaten run, and finished the season with just a single loss following their 3-0 mauling at the hands of Monomotapa.

Highlanders, who are known for blaming everyone but themselves over their misfortunes, will always look at the decision to award Dynamos the points in a game in which Hwange coach Nation Dube was assaulted. They will always feel that the delay in concluding the wrangle until the very last weekend could have in a way influenced the final verdict reached.

Bosso’s run, although it was expected considering Bosso’s stature as one of the biggest teams in Zimbabwe, came as a surprise considering their poor show last season.

This makes their Zambian coach Kevin Kaindu a dark horse for the Coach of the Year Award, which is likely to be won by Dynamos coach Kallisto Pasuwa. Pasuwa managed to retain the championship with his side. The season also saw Chicken Inn coach Adam Ndlovu negotiating a place for his side in the Confederation Cup next year.

Sadly, as is always the case every season, some teams have to be relegated with the axe falling on Gunners, Quelaton, Hardbody and Blue Rangers.

This time Moses Chunga failed to live up to his reputation of saving teams  from relegation. Ironically, Chunga, who won the championship with Gunners in 2009, is the same coach who failed to save them from the dreaded chop.

However, the season welcomes the return of the self-proclaimed “Jose Mourinho of Zimbabwean football” Gishon Ntini who guided Triangle to the premiership from the Eastern Region.

Also joining the Premiership is Friday Phiri’s Triple B and Black Rhinos.

Stung by their failure to win the championship last season, the platinum miners went on a buying spree, luring Ali Sadiki, Gilbert Banda, Mitchell Katsvairo and Rowan Nenzou, among a host of others.

The club also ended up with egg on their faces after off-loading Nelson Mazivisia to Shabanie, but the striker ended up being the league’s top goal scorer with 18 goals.

The Soccer Star of the Year, his two runners up, Rookie of the Year and the Coach of the Year will be announced on December 14. CAPS United, by their standards made noise for all the wrong reasons as they struggled with their fans being known for crying after their team’s losses than anything else.

After the bringing in Irishman Sean Connor, the team just failed to shine, with the team’s Farai Jere eventually quitting in frustration even before the season ended.

Sadly, some players and officials found themselves banned following their alleged involvement in fixing national team games between 2007 and 2009 in Asia.

The Premiership’s notable casualties were Guthrie Zhokinyu who was banned for life and former CAPS United coach Taurai Mangwiro, who was handed a 10-year ban.

Such was the 2012 Castle Lager Premier Soccer League season.