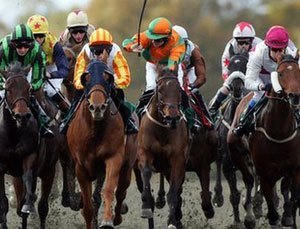 Three footballers and jockey Andrew Heffernan have been given lengthy bans from racing after a corruption inquiry.

Three footballers and jockey Andrew Heffernan have been given lengthy bans from racing after a corruption inquiry. Report by BBC Sport

Heffernan is suspended for 15 years and Doncaster’s James Coppinger for three years for breaching racing’s rules.

They were among nine found guilty in an investigation by the British Horseracing Authority (BHA) into gambling on horses to lose.

Bans totalling 70 years were given and BHA spokesman Adam Brickell said “an elaborate network of corruption had been identified and successfully prosecuted.”

The nine races at the centre of the investigation, in which Heffernan’s beaten mounts were laid to lose on betting exchanges, took place between November 1 2010 and March 31 2011.

Chopra, who has admitted to having a gambling problem, said he would not attend last week’s hearing, which was scheduled to last 10 days, but was concluded in four.

He and the other footballers were found to have placed bets using inside information provided by Heffernan.

In some cases, thousands of pounds were staked. While Wilson made more than £14 000 profit from four bets, he also lost £12 122 in one wager when a horse he backed to be unplaced actually finished second. And similarly, Coppinger lost £1 295 from his one bet.

A disciplinary panel ruled the jockey, who now races in Australia, did not ride the horses on their merits to obtain the best finishing position possible.

In addition to Chopra (29), Coppinger (31), Wilson (33) and Heffernan, five “unlicensed individuals” were also found to have used inside information.

The suspensions apply to racecourses and training yards, and prohibit any dealings with licensed individuals, which includes jockeys, trainers, owners and stable staff.

Winger Coppinger, who denied any corruption, is back at Doncaster after a loan spell with Nottingham Forest.

Inglis, a one-time girlfriend of Heffernan, offered to take a bribe or bribes from Chopra, Garner, Joshee, Shelley and Wilson.

Garner placed lay bets — betting on a horse not to win — on horses trained by Alan McCabe, when he was working as a stable employee for the trainer.