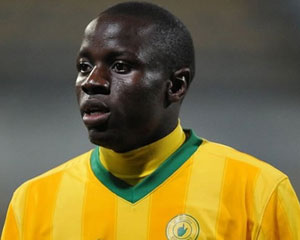 The 25-year-old joined Oostende on a one-year loan deal with an option of a permanent move next season, depending on his performance.

“It has been a difficult period of negotiations,” said Nkomo. “Sundowns wanted something fair to them and they got what they wanted. Hopefully, he will be able to make a permanent transfer by the end of the season. The boy is so happy.”

The loan fee involved in the deal was not clear yesterday but Sundowns had initially demanded 2 million euros for a permanent transfer which they later slightly reduced.

But a loan move was the best the two parties agreed.

At first, Oostende were pushing for a clause that spells a reduction in the transfer fee — paid in installments — if they are relegated from the top-flight league, something that Sundowns declined. The long-dragging move came after Mushekwi had impressed with regular scoring in Oostende’s pre-season matches.

Mushekwi had made several attempts to break into Europe, including former Bundesliga side Greuther Furth, which he came very close to joining last season after passing medicals.

English Premiership side Fulham are reported to have made enquiries about Mushekwi a few seasons ago.