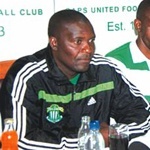 The “Green Machine”, who last week were rocked with problems that saw their coach Taurai Mangwiro throwing in the towel before making a dramatic U-turn, got their goals through Tawanda Nyamandwe’s 18th minute header and second half substitute David Redidiyon’s strike in the 60th minute.

Brian Mbirimi reduced the arrears in the 54th minute for Chicken Inn. A relieved Mangwiro could not hide his excitement after the match as he said another loss after last week’s defeat to Shabanie Mine would have worsened his team’s problems.

“It is good that we have progressed to the next round of the competition. We worked hard for this and I am happy we won the match,” said Mangwiro.

Chicken Inn assistant coach Mandhla Mpofu said he was not happy with the way the referees handled the match.

“The referees were a bit disappointing, but we gave CAPS United a lot of room in this match. We also missed a lot of chances,” he said. CAPS United could have got the opener as early as the third minute had Nyamandwe’s header off Benson Maglas’s cross found the mark.

Chicken Inn, who had dedicated the tournament to their late coach Adam Ndlovu, also had a chance to surge forward but Tafadzwa Dube was at his best to deny Clement Matawu.

However, after an exchange of blows, CAPS United finally got the breakthrough they badly needed in the 18th minute when Nyamandwe headed in a Ronald Pfumbidzai corner.

Chichen Inn replied in the 54th minute after Mbirimi’s powerful strike from outside the box beat Dube.

However, CAPS United had other ideas as Rediyoni found the mark, just four minutes after replacing Dominic Chungwa.

SRC cornered in Zifa fiasco
It recommended the reinstatement of the Kamambo led board by October 31 2022.
Sport
By Munyaradzi Madzokere
3h ago

School of sport: Where is school sport going?
In some schools, team sports have flourished. The problem however has not been theirs.
Sport
By Tim Middleton
3h ago

The Soccer Whiz: Which players will illuminate Qatar 2022?
In a team full of superstars he stood head and shoulders above them all as France claimed the World Cup for the second time in their history.
Sport
By Zak Hawa
3h ago

Jonga guns for another WFF championship gold
The World Fitness Federation Championships are scheduled for November 19th and 20th in the Asian country.
Sport
By Lavender Chabata
3h ago

By Munyaradzi Madzokere 3h ago
SRC cornered in Zifa fiasco

By Tim Middleton 3h ago
School of sport: Where is school sport going?

By Zak Hawa 3h ago
The Soccer Whiz: Which players will illuminate Qatar 2022?