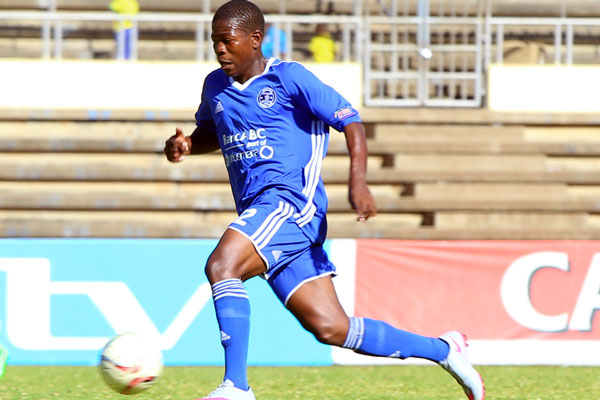 Dynamos continued their revival after a difficult start to the season with a hard-fought slender victory against a stubborn Tsholotsho side that held its own up until a quality run and a composed finish from youthful striker Quality Kangadzi at Dulivhadzimu Stadium yesterday.

Dynamos continued their revival after a difficult start to the season with a hard-fought slender victory against a stubborn Tsholotsho side that held its own up until a quality run and a composed finish from youthful striker Quality Kangadzi at Dulivhadzimu Stadium yesterday.

Industrious all afternoon and throwing himself at almost everything, Kangadzi ghosted past the Tsholotsho defenders Godfrey Mukambi and Nkosilathi Moyo to beat Mariyoni Chang in goal for the home side.

Chang had done well to block the initial shot but the rebound fell kindly for Kangadzi, who made no mistake at the second bite of the cherry to earn all three points for DeMbare.

Dynamos, who are now on a three-match winning streak, had struggled to impose themselves in the contest until Llyod Mutasa pulled out a visibly tiring Denver Mukamba for forward Tawanda Macheke.

That put some teeth in Dynamos attack but they found Tsholotsho’s Godfrey Mukambi unyielding as the central defender put on a solid display.

Dynamos almost took the lead as early as the fifth minute with veteran defender Ocean Mushure’s curling effort from a rebound just outside the box bringing the best out of Chang.

The first half was a tale of missed chances, with veteran left back Xolani Ndlovu, drafted into midfield by new coach Darlington Dodo, unlucky not to beat Dynamos keeper Tonderai Mateyaunga, who produced a brilliant reflex save.

In the 20th minute Mostafa Ponyera shot wide with Mateyaunga to beat after being set up by hardworking Bruno Madanhire.

The teams went to the breather with fans desperate for a goal.

Kangadzi could have grabbed an early lead just after the break when he cleverly chipped the ball towards the near post, but Chang was equal to the task.

Emmanuel Mandiranga received a pass from newly-introduced Cleopas Kapupurika and charged along the left channel before his low cross was chipped over by Kangadzi.

Then came the decisive moment of the match when Kangadzi outpaced Mukambi and Moyo from the centre circle to meet a long ball from the Dynamos defence before beating Chang on the second attempt.

Dodo, the new Tsholotsho coach, said he was happy with his team’s perfomance despite the loss.

“We played a good side and matched them for most of the match but my boys lost concentration in the end, but they had done well.”

“I think we just need to work on the fitness of the players and boost their motivation and we will soon be a force.”

Mutasa, who is slowly turning around his team’s fortunes after a difficult start to the season, praised his opponents for putting up a strong fight.

“They are struggling but they played well and gave us a good game,” he said.

“We put a lot of pressure on them in the second half when we introduced Kapupurika who together with Kangadzi played really well,” he said.

“I am now looking forward to our next assignment against the log leaders [Ngezi Platinum] and we will obviously give our best,” Mutasa said.

Results and fixtures at a glance:

Musona proves critics wrong
He was released by Sekhukhune ahead of the start of the South African premiership in August last year and ended up retracing his footsteps to FC Platinum at the beginning of this year.
Sport
By Munyaradzi Madzokere
21h ago

Chadya reveals one last dream
The 25-year-old goalie, affectionately known as Maoko at the club also had a dream to don the Warriors colours and has already ticked that box.
Sport
By Munyaradzi Madzokere
21h ago

Zim’s Rugby Ref of the Year Pazani reflects on “amazing” year
Pazani was the biggest winner on the night by being the country’s Rugby Referee of the Year in recognition of her achievements on the international circuit this year.
Sport
By Daniel Nhakaniso
21h ago

Cheetahs end Dubai 7s Invitational campaign with Shield title
The loss meant the Cheetahs were relegated to the Shield competition semifinals; they salvaged some pride with a 21-7 win against the Japan Sevens Development Squad (SDS).
Sport
By Daniel Nhakaniso
21h ago

By Munyaradzi Madzokere 21h ago
Chadya reveals one last dream