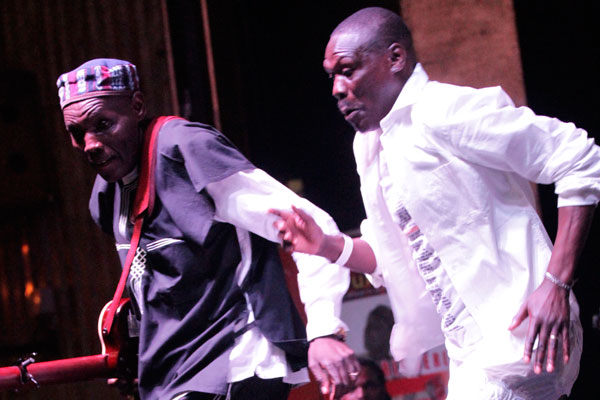 When music superstar Oliver Mtukudzi performed at the One Million Man March organised by Zanu PF last year, a section of music followers were rattled to witness what they viewed as a “sell-out” move by the music icon.

When music superstar Oliver Mtukudzi performed at the One Million Man March organised by Zanu PF last year, a section of music followers were rattled to witness what they viewed as a “sell-out” move by the music icon.

The debate of whether he “lay down with the devil” raged on, dragging politicians into exchanging verbal salvoes, while legendary musician Thomas Mapfumo also registered his distaste.

Despite his vague political approach that he sells as neutrality, Tuku (as he is warmly known) has often courted controversy for supposed political undertones in some of his lyrics since long back.

A new book titled Oliver Mtukudzi: Living Tuku Music in Zimbabwe which was launched in Harare recently sought to debunk some of the myths about the superstar.

In the early 2000s, the song titled Wasakara, off his Bvuma-Tolerance album triggered a cocktail of interpretations, with one leading conversation being that he was referring to nonagenarian President Robert Mugabe’s long stay in power.

In a chapter titled Listening as Politics, Tuku is quoted reinforcing his old stance that the lyrics were not targeted at anyone, but open to diverse readings.

However, in his comment he does not overrule the fact that the song is an underlying critique of a leadership crisis in different societal institutions.

“In my Shona culture, criticising is not illegal, not at all. It’s not that you don’t criticise leaders. Leaders can be criticised. That’s how they learn in our culture,” Tuku is quoted in the book.

“When you criticise one [leader], you’re not criticising him only; you’re criticising everybody else who falls into the same category…” With so much political meaning in his songs, one would wonder why Tuku is impervious of directly addressing political issues, what Kyker terms an “ambiguous political stance”.

Musicians like Mapfumo and Leonard Zhakata have ended up in trouble for overtly redressing the country’s political climate. Mapfumo went into exile after a couple of arrests, while Zhakata’s career almost went into oblivion owing to lack of airplay after the release of hits like Sakunatsa.

Having championed a number of campaigns, including that of gender equality and HIV and Aids, Mtukudzi, who has virtually resented politics, said partisan musicians are “not really artists”.

Ironically, the Black Spirits frontman revealed his role in the liberation struggle against the Ian Smith regime, recounting his shows during the 70s as “part of war”.

“I truly believed, if we don’t go and de-stress those people, who’s going to do it? Are these people going to stay in war, war, war? We have to go there and perform for them,” Tuku said.

“So it wasn’t going there for pleasure — it was part of war. And I truly believe that’s the way I fought war for liberation in Zimbabwe. “I fought it by my microphone, and my guitar.”

While uncertainty still lingers on where his heart really lies in the political sphere, Tuku has continued to churn out more songs that are politically inclined.

Regardless of the interpretations storm, one trait that still remains in Tuku’s music is his ability to trigger a variety of thoughts, including in politics, as seen in his latest album Eheka! Nhayi Yahwe, which carries the song titled Hunhapwa where he challenges modern slavery.

Zim actor shot in SA
“I was shot three times at the back of my shoulder, and I suspect there could be something behind this.”
Standard Style
By Moses Mugugunyeki
5h ago

In the groove: Did hicc concert mark end of sungura?
Sungura music (sometimes referred to as Museve) at some point used to be Zimbabwe’s most popular music genre especially in the 1980’s.
Standard Style
By Fred Zindi
19h ago

Mapfumo fears for his life
Mukanya has also rebuked President Emmerson Mnangagwa’s regime, which ascended to power through a military assisted coup in 2017.
Standard Style
By Sindiso Dube
19h ago

By Moses Mugugunyeki 5h ago
Zim actor shot in SA

By Fred Zindi 19h ago
In the groove: Did hicc concert mark end of sungura?

By Sindiso Dube 19h ago
Mapfumo fears for his life

By Admire Jamu-mlambo 19h ago
Music brought windfall in my life: Pinjisi