There goes ED bluffing, yet again! 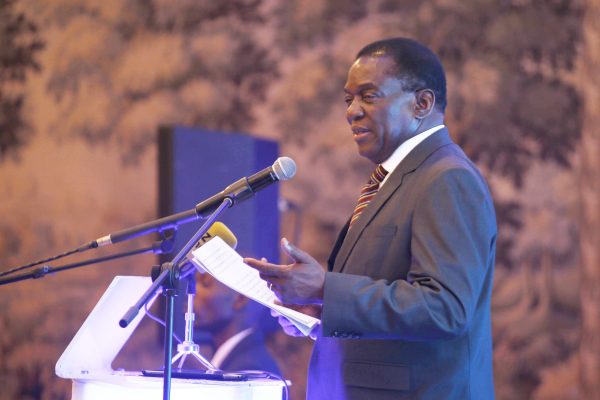 History has a rich record of dumb presidents, so you really don’t worry too much when President Emmerson Mnangagwa forgets the name of the National Sports Stadium or messes up simple math during a political rally.

History has a rich record of dumb presidents, so you really don’t worry too much when President Emmerson Mnangagwa forgets the name of the National Sports Stadium or messes up simple math during a political rally.

Jacob Zuma got his tongue stitched up for twisting it to pronounce a simple number, apparently for mostly being so used to spelling: “shower” and “Guptas”.

And Donald Trump at one time, if not even now, thought that climate change was merely in the imagination of Mexican morons looking for an excuse to jump the border into his country, so they must be stopped with a high wall. From Warren Harding to Bill Clinton, American leaders, for instance, revealed a rare show of thickness that was more entertaining than sad so they got forgiven for that too.

But you don’t get too ready to forgive the man they call Mnangagwa for showing weird political ignorance. Or at, least, feigning ignorance. It’s the same thing, though, when you get to the crunch, because pretending that you don’t know something when you are supposed to know it is the same thing as being ignorant, so much so that people won’t give you a chance but haul you to the morons’ class without thinking too hard about it.

Just recently, Mnangagwa claimed that he wasn’t aware how deep-seated corruption in Zimbabwe was. It was useful for him to remind the people that the police, prosecution and courts were as rotten as they come, but for him to say that he didn’t know that graft was such a rampant ailment here can’t stick. It’s a crass version of dumbness.

It would never make sense right from the start, anyway. Even before the army walked him to the throne on its shoulders after the ouster of Robert Mugabe in late 2017, ED was always howling and moaning about corruption. He was vice-president then. Where would he be getting that stuff if he didn’t know just how bad things were for the country? Besides, after assuming the presidency and he was running to legitimise his militarised ascension to power, he made the fight against corruption a cornerstone election manifesto pitch in 2018. In between, he would shout “Corruption!” at every drop of his scarf.

Here is why Mnangagwa’s claim of ignorance doesn’t wash. He knows no other job but being a Cabinet minister. He was part of the senior hierarchy of government from independence in 1980. He was State Security minister, so the omni-present spooks must have been advising about how corrupt the civil bureaucracy was getting over the years. Unless he was busy with other things.

Note, though, that “other things”, the Zanu PF way, is never a flattering phrase. Because it means you would always be busy in the kitchen either looking for the cookie jar or sticking your fingers in there. The only difference would be that focusing on the cookie jar may distract you from what the next guy is doing.

In practice, this isn’t possible, of course. For you to know where the cookie jar is, you must naturally know who else is on the prowl and what window they are sneaking in through. You also need to get a whole host of people helping you get over the window, door or whatever aperture is there.

And Mnangagwa was also the Justice minister, speaker of Parliament, head of government business in Parliament, Defence minister and, of course, vice-president between 2014 and 2017. He couldn’t have been sleeping on the wheel all that time, so President Mnangagwa must have known how the corrupt “gooks” were doing their business when he was with the Justice ministry. Criminal cases passed through his desk, dockets were disappearing, charges were being cooked up and judges, magistrates and prosecutors were getting all manner of bribes while they were not being manipulated by the powers-that-be. And chances were he was part of that sweltering scandal.

As speaker of Parliament, he got to know a lot about the fabric of corruption in Zimbabwe. Oral hearings took place. Corruption was also robustly debated in parliament.

Just grab the next Hansard while he was still in that office and you will know what this is saying. Again, as the Head of Government Business in the august house, so many things were said and done. A big amount of that pertained to corruption in whatever form.

What was Mnangagwa doing as VP not to know that corruption is such a big issue in Zimbabwe? For starters, corruption trackers such as Transparency International were religiously milling out reports on the huge extent of graft in this country, local civil society and other watchdogs were doing the same and even the war vets were hollering about it. Wasn’t he listening? If not, how come he started talking about corruption as if his political future hung on that?

At times, he was the Acting President and lots of nasty, rotten stuff happened then. He had access to whole mounds of intelligence documents, engaged with business, politicians, the security sector and all sorts of people who must surely have advised him on the reach of corruption in Zimbabwe.

So, why is Mnangagwa giving that sissy moan about not knowing much about how far our systems have been corrupted? In other words, why has he decided to lie to us once again? Nobody but himself would know the real truth, but there is a good cause to assume that he is playing some slimy politics with the people as he has always done.

One possible reason is that he is feeling guilty about his gross failure in fighting corruption as he has promised the nation since late 2017. His anti-corruption deck is leaning to one side and looks set to be crumbling. Knowing this, he must find an excuse — never mind the lameness — for his failure and hopefully scrape something out to enhance his political self-preservation, considering that he nurses the ambition to run again in 2023.

But that’s not what will make people start thinking that he is a clever guy and vote him into office again. He must just do the right thing. Now that he knows the extent of corruption in the country as he claims, that must be used to inform a sustainable and anti-graft strategy. The business of fighting corruption can’t proceed from assumptions and political speculations but a grounded framework.

Anti-corruption fights follow basic routes. Get your framework in place, decide on corrective actions, study your systems and identify the gaps and centre everything on a policy that brings together all the relevant stakeholders together. Simple.

Tawanda Majoni is the national coordinator at Information for Development Trust (IDT), a member of the Global Investigative Network (GIJN) and can be contacted on tmajoni@idt.org.zw.