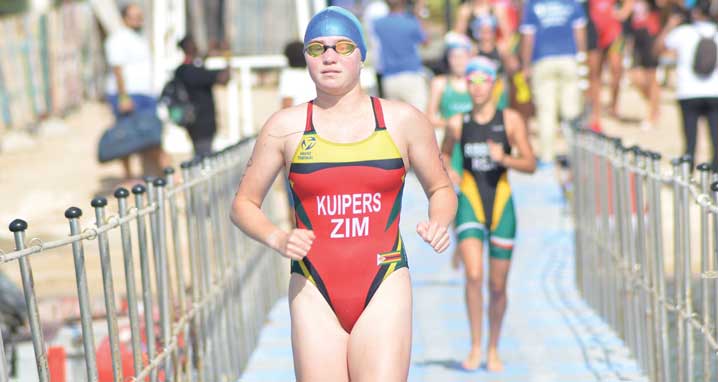 The two athletes who are products of the development efforts by the local triathlon body are set to miss the 2022 Troutbeck Bonaqua Africa Triathlon Cup which is set for April 2 in Nyanga.

TRIATHLON Zimbabwe has backed the country’s two promising athletes Andy Kuipers and Matt Denslow to represent the country in the elite men and women class respectively at the 2024 Olympics Games, which will be staged in Paris, France.

The two athletes who are products of the development efforts by the local triathlon body are set to miss the 2022 Troutbeck Bonaqua Africa Triathlon Cup which is set for April 2 in Nyanga.

Veteran Greer Wynn is the only athlete, who will represent the country in the elite classes while there is no representative in the men category.

Denslow, who won a gold medal for Zimbabwe at the Troutbeck Junior African Cup in 2019 and is studying international business at the University of Bath in the UK, was the last Zimbabwean male athlete to compete in elite class back in 2020.

On the other hand, US-based Kuipers, who is currently at Lenoir-Rhyne University in South Carolina, is not available for the annual flagship event in Nyanga, due to school commitments.

While expressing satisfaction and the amount of young talent being churned out by the association, Triathlon Zimbabwe president Dave Ellis singled out Denslow and Kuipers as potential candidates for Paris 2024.

“We have the potential in Andy Kuipers and Matt Denslow; they are both developing quite nicely; they are out of our fold at the moment unfortunately because of geographical constraints.

“But they are being supported by the World Triathlon. They have been given some small grants, something to keep them going and hopefully it gets to Paris 2024,” he said.

Kuipers recently took part in the 2022 Americas Triathlon Cup Sarasota-Bradenton where she finished 34th out of an elite women field of 41 athletes.

Triathlon made its debut at the Olympic Games at Sydney 2000 and Zimbabwe is yet to have a representative in the sport at the global games.

However, Ellis was appointed by the World Triathlon to officiate at the Tokyo Olympics while two others Shaun Shelton and Catherine Caminade-Lavault Jennings were technical officials at the Paralympic Games.

Triathlon is also hoping to have more technical officials at the Paris Games.

“We have got all our technical officials out there in various international events. This year we had Rick Fulton going to Tunisia, Shelton is going to SA Junior Championships and Africa Triathlon Junior Cup in Gqeberha (Port Elizabeth). There are a few of us attending various events and with Rick (Fulton) as the continental coordinator for triathlon there is lots of scope to possibly get some more officials going through to Paris 2024,” Ellis said.