BY TAFADZWA KACHIKO
Zimbabweans yesterday reacted with shock and anger to revelations that the mutilated body of a Citizens Coalition for Change (CCC) activist, who had been missing for two weeks was found dumped in a well at a homestead of a Zanu PF terror gang leader.

Moreblessing Ali went missing on May 24 after she was allegedly abducted by her ex-boyfriend Pius Jamba in Chitungwiza. Her body was retrieved from a well at the family homestead of known Chitungwiza Zanu PF terror leader Simbarashe Chisango in Manyame.

Jamba is said to be related to Chisango and is also a Zanu PF member.

Ali’s body was cut into two and her intestines were put in a plastic bag.

When Ali was abducted, police were at pains to explain the reason for the crime, saying she was a victim of a relationship gone sour and her disappearance had nothing to do with politics.

But the opposition has insisted that Ali was a victim of Zanu PF terror attacks.

Yesterday, the discovery of her body coincided with a CCC planned search party for Ali in Chitungwiza and other areas, with the opposition party also offering US$5 000 reward to individuals who would provide information on her whereabouts.

When The Standard arrived at the Chisango homestead at Dunnottar Farm,  shocked villagers had gathered to witness the retrieval of the activist’s body.

Ali’s body was positively identified by her son, Silent.

“I was thinking that it’s a lie that my mum was found murdered.

“I even sent messages to people saying that it was a lie.

“I then realised that it was true when the police called me,” Silent told The Standard.

“Police asked what my mother was wearing and I could remember what her friend told us.

“I identified her with dreadlocks, brown jacket and polo neck. Her body was cut into three pieces. Part of the dreadlocks were cut.

“I missed my mother. I had no rest. I couldn’t sleep.

“I was just waiting to see my mum. I am glad that her body was found but deep inside I am deeply hurt.”

Ali’s murder is being investigated by Marondera police under CR number 5048384.

Nyathi described Jamba as a suspect in the murder case. He said police were disturbed “by some politicians, including some lawyers, who are issuing threats to government officials and the police in connection with the said case.” 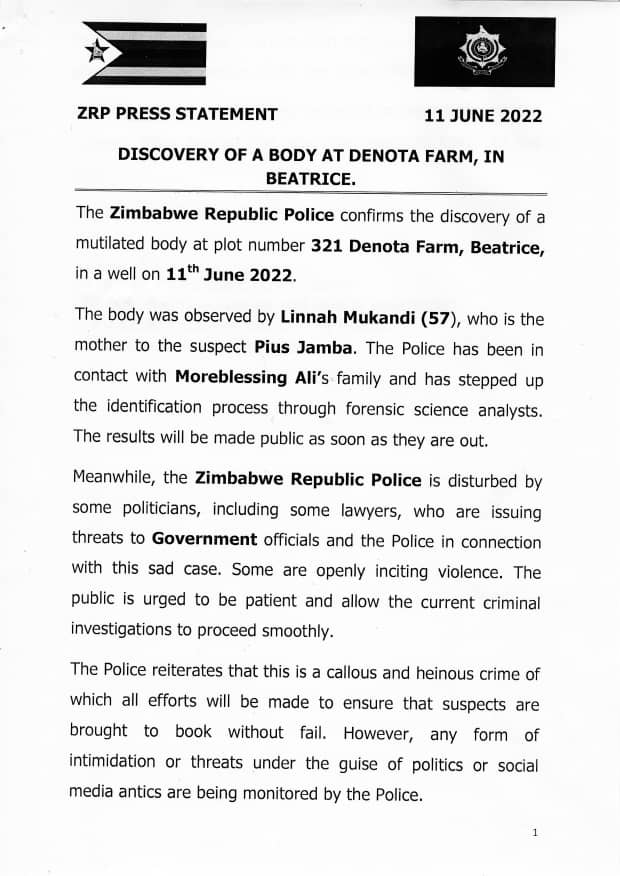 “Some are openly inciting violence,” he claimed. “The police reiterates that this is a callous and heinous crime of which all efforts will be made to ensure that suspects are brought to book without fail.”

“The body found at the well at the Chisango home has been formally identified as Moreblessing Ali,” Mahere posted on Twitter.

🟡Our security dept & local leadership are currently working with @PoliceZimbabwe in Nyatsime. The body found at the well at the Chisango home has been formally identified as Moreblessing Ali. We await a formal report from @PoliceZimbabwe on the circumstances of the murder. pic.twitter.com/fw4R3Fau5g

🟡This is the shallow well that Moreblessing Ali was buried in by her murderers. She was forcibly taken on 24 May. Since then, our security dept & local leaders mounted a concerted search for her with @PoliceZimbabwe. Her mutilated body was found at the Chisango home today. pic.twitter.com/7ES4emOeow

“We await a formal report from police on the circumstances of the murder.”

Riot police, supported by water cannons, camped at the scene.

“Hard to believe, let alone accept that they would kill Moreblessing after abducting her on May 24,” Mandaza said on Twitter.

Hard to believe, let alone accept, that they would kill Moreblessing after abducting her on 24 May. Her lifeless body dumped in a well, not far from where they abducted her. I feel so sore and devastated – and imagine her children, relatives and friends! We have to stop this!

“Her lifeless body dumped in a well, not far from where they abducted her.

“I feel sore and devastated and imagine her children, relatives and friends.

“It has been two and half weeks since Moreblessing Ali went missing,” Olkkonen said on Twitter.

“I hope she is safe. Zimbabwe has a troubled history of missing people and forced disappearances.

It has been two and a half weeks since #MoreblessingAli went missing. I hope she is safe. Zimbabwe has a troubled history of missing people and also forced disappearances. It is important that light is shed on these cases and that they are investigated thoroughly. @euinzim

“It is important that light is shed on these cases and that they are investigated thoroughly.”

Human rights lawyer Siphosami Malunga said enforced disappearances were a Zanu PF tactic to strike fear into the hearts of its critics.

“Enforced disappearance is a Zanu PF terror strategy. During Gukurahundi, thousands of citizens disappeared. Citizens have disappeared at the hands of the state/party agents,” Malunga commented on Twitter.

Some victims of forced disappearances in the country have surfaced nursing torture injuries, while others like Patrick Nabanyama, Paul Chizuze and Itai Dzamara have never been seen again following their abduction in 2000 and 2015 respectively.

The government has repeatedly denied its involvement, though some activists like Jestina Mukoko were later to be found in state custody.

Stories you will enjoy

Hwange volunteers fighting to save wild dogs from extinction

US joins calls for Masaraure’s release

This website uses cookies to improve your experience while you navigate through the website. Out of these cookies, the cookies that are categorized as necessary are stored on your browser as they are essential for the working of basic functionalities of the website. We also use third-party cookies that help us analyze and understand how you use this website. These cookies will be stored in your browser only with your consent. You also have the option to opt-out of these cookies. But opting out of some of these cookies may have an effect on your browsing experience.
Necessary Always Enabled
Necessary cookies are absolutely essential for the website to function properly. This category only includes cookies that ensures basic functionalities and security features of the website. These cookies do not store any personal information.
Non-necessary
Any cookies that may not be particularly necessary for the website to function and is used specifically to collect user personal data via analytics, ads, other embedded contents are termed as non-necessary cookies. It is mandatory to procure user consent prior to running these cookies on your website.
SAVE & ACCEPT

You have successfully subscribed to the newsletter

There was an error while trying to send your request. Please try again.