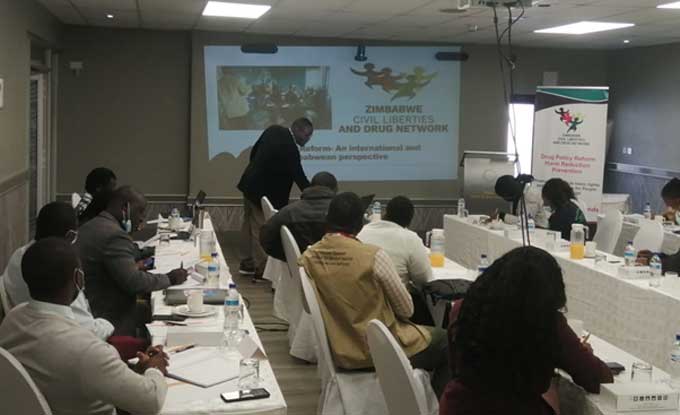 The meeting also discussed the contexts in which drug and substance use occurs as well as the dangers associated with drug use as well as gaps identified in the current strategy to mitigate drug use challenges in the country.

BY STYLE REPORTER Zimbabwe’s efforts to tackle the drug problem could soon hit a brick wall if gaps in the implementation of the Zimbabwe National Drug Master Plan (ZNDMP) are not addressed urgently, stakeholders attending an interministerial committee on drug and substance use training have said.

The meeting also discussed the contexts in which drug and substance use occurs as well as the dangers associated with drug use as well as gaps identified in the current strategy to mitigate drug use challenges in the country.

Zimbabwe adopted the ZNDMP in September last year, but there are fears that the blueprint document could gather dust in some forgotten drawer, which might jeopardise efforts to mitigate drug use in Zimbabwe.

The ZNDMP seeks to provide a clear roadmap to addressing the cross-cutting drug use problem as well as highlighting a results-based implementation matrix to illustrate the roadmap as well as to ensure rigorous monitoring and evaluation.

“One of the outcomes of the interministerial committee on drug and substance use training was about gaps in the implementation of the ZNDMP,” said ZCLDN projects director Wilson Box.

“Participants believed the current structure is heavily tipped on the chairperson of the interministerial committee who happens to be the Public Service, Labour and Social Welfare minister Paul Mavima whom they feel should be replaced by a national coordinator like in the case of the Covid-19 taskforce.”

The interministerial committee on drug and substance use has since made a proposal to that effect.

Box said apart from the implementation of the ZNDMP, there was need to reform drug laws.

“There is urgent need to update our Zimbabwean drug laws to adapt to new health and social realities, for instance the Dangerous Drugs Act  15 and Criminal Codification Act Chapter 9:23 (57),” he said.

“There is a need to call for a Zimbabwe Indaba on drugs to promote an open and inclusive debate, to review the objectives of drug policy (prioritise health, human rights and development) and to support policy experimentation.

“The indaba should bring to the fore how to end the criminalisation of the most affected populations and promote harm reduction.”

A representative in the Drug and Substance Unit in the Public Service, Labour and Social Welfare ministry Grace Ruocha said despite a plethora of policies and legislations around drug and substance use, there was need for reform.

“There is need for review of policies and legislations as the current ones are now outdated and non deterrent,” she said.

She said Zimbabwe has made significant improvement in the fight against drug and substance use.

“We conducted a learning exchange visit to Ghana who have exceptional models in responding to drug and substance abuse.”

She said plans to open a psychosocial support centre at Makombe Building in Harare were now at an advanced stage while a draft constitution of the drug and substance use mitigation fund has been submitted to the Finance ministry for approval.

“Realising the gravity of the drug and substance problem, the government has roped in different organisations as part of the equation,” Mtetwa said.

“Zimbabwe Civil Liberties and Drug Network comes in that equation. There is need to have more hands to try and minimise drug use.

“Issues of training are critical and should take centre stage to build over capacity to discharge the mandate.”