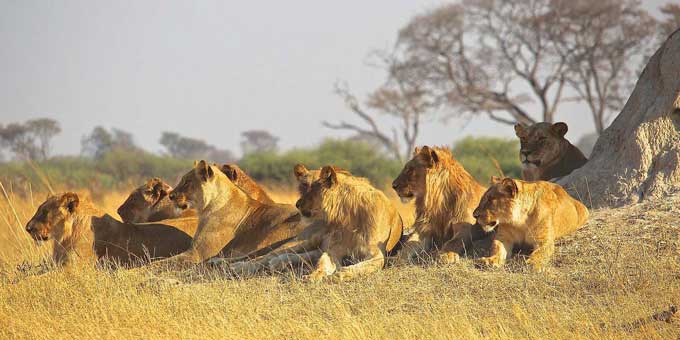 In a presentation to the British parliamentary committee debating proposals to ban the importation of African wildlife trophies into the United Kingdom, African lion specialist Pieter Kat said a recent field study by the organisation Lion Aid, revealed worrying prospects for the survival of African lions:

BY OSCAR NKALA A leading global lion conservationist has warned of the impending extinction of lions in Africa where the overall population has fallen below 10 000 from a peak estimate of over 20 000 eight years ago.

In a presentation to the British parliamentary committee debating proposals to ban the importation of African wildlife trophies into the United Kingdom, African lion specialist Pieter Kat said a recent field study by the organisation Lion Aid, revealed worrying prospects for the survival of African lions:

“Our conclusion is that there are less than 10,000 wild lions left in Africa. We base that number on the latest information from the ground,” Kat said.

“The current estimate of 20 000-30 000 lions (in Africa) as stated by the International Union for the Conservation of Nature (Red List) of 2016 is grossly inaccurate and urgently needs to be updated.”

Kat said the IUCN 2016 African lion population estimate was flawed because it included thousands of non-wild, captive-bred and fenced-off South African lions in the final count.

“What we did in our latest study is to review the number of lions in what are called lion conservation units,” he said.

“We went back to look at these conservation units in detail.

“Most people agree that lions should be classified as endangered on the IUCN Red List.

“However, they are not. Instead, they are classified as ‘vulnerable’.

“One reason for this is that the IUCN partly based their estimates on 16 fenced lion populations in Southern Africa, mostly in South Africa.

“Those fenced populations are not truly wild lions.”

He said the IUCN estimate was also heavily influenced by trophy hunters who manipulated lion census data to support their own claims that lion populations are healthy enough to support trophy hunting business.

Kat said trophy hunting remains one of the biggest contributors to the decline of African lion populations as well as the depletion of breeder gene pools through its deliberate targeting of big male lions.

“The best hunting concessions in terms of tenders and bids all happen to be right on the borders of the national parks.

“We know that they are luring the lions out of national parks to be killed in private hunting concessions, just like Cecil (in Zimbabwe) was.

“More hunting concessions in Tanzania and Zimbabwe are not being bid on anymore because they are no longer profitable. The lions have all been shot out.”

According to Kat, the claims often made by the trophy hunting lobby to the effect that trophy hunting funds the conservation of African wildlife are grossly inaccurate and deliberately misleading:

“Trophy hunters are allowed to sit on the IUCN committee of lion experts.

“More and more people have been allowed into the group who were not primarily concerned with lion conservation but rather lion utilisation.

“This causes problems, because whenever politicians want to make decisions on wildlife conservation, the first place they turn to is the IUCN.

“They view the IUCN as the organisation that supposedly has the knowledge and information about how to best conserve species in the wild.

“However, many of the “experts” that are being consulted are not the ones who have the right information.”

Kat said there is clear evidence that lions are being badly affected by trophy hunting since the hunters select the best animals, which are often the biggest-maned male breeding lions.

“A number of studies in Zambia, Zimbabwe, Botswana and Namibia have shown this.

“A hunter does not want a young male (although these were hunted in Tanzania when they ran out of the big males).

“The big-maned lions hunters target are often the leaders in a pride. This way, trophy hunting results in heavy disruptions of lion prides.

“The females do not produce cubs anymore because new males will come in and say, “that’s not my cub” and kill the cubs.

“The pride structure of lions simply falls apart as a result of trophy hunting.”

To save lions from extinction, Africa range states should adopt conservation strategies to save the biggest and the best remaining lion cluster populations.

They also need to craft holistic conservation strategies that include the use of effective, tried and tested techniques to protect rural communities and keep livestock safe from predators in order to reduce human-wildlife conflicts.