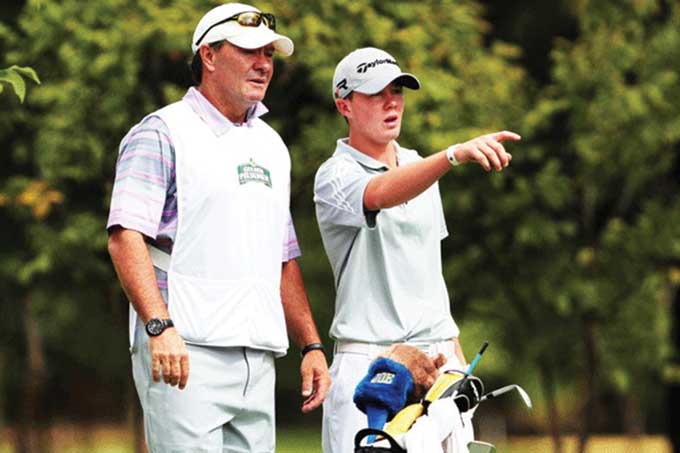 BY DANIEL NHAKANISO US-BASED Zimbabwean golfer Sean Crocker has revealed his father Gary, who played international cricket for the country, is the biggest influence and inspiration behind his career which is now poised to reach the next level after he recently claimed the biggest win of his burgeoning career.

After a torrid start to the 2022 DP World Tour season, with eight missed cuts and a withdrawal in his first nine starts, Crocker went wire-to-wire at the Hero Open at Fairmont St Andrews in Scotland to win his first professional title.

And writing on the DP World Tour’s Player Blog this week, Crocker opened up on his family’s influence on his career and particularly his dad, from whom he gets his sporting genes.

The Harare-born golfer, now playing under the flag of the United States, is the son of former Zimbabwe national team cricketer Gary Crocker.

“My family is everything to me. My mum is a special lady in my heart. The whole sporting world is not really her place. She is more of a peacekeeper of the family. My dad is the key to pretty much my sporting career,” Crocker said.

“He has always pushed me. In a good way, he has made my life a living hell when it comes to me competing in sports because he is a tough person. He doesn’t give me much room to gloat. He has always been the rock to what I’ve done out here.”

Crocker revealed how his father’s success as an international cricketer has inspired him to make a name for himself in the sporting world.

“He played professional cricket for Zimbabwe. I’ve always wanted to make him proud in what I’ve done as an athlete because he was a hell of a sportsman. It’s a special thing to be able to keep our last name prominent,” he said.

Bulawayo-born Gary played in Zimbabwe’s inaugural Test match in 1992 and drove 440 kilometres through the night to do so after receiving an emergency call late at night due to an injury to Ali Shah on the eve of the historic match.

Unfortunately, invasions of white-owned farms at the turn of the century did not spare his family and after losing all they had, he had to leave the country and start a new life in California when Sean was five.

Sean initially shone at baseball first, but at seven he and his father were invited by Nick Price – Zimbabwe’s only Open champion – to the Tiger Woods World Challenge.

Price became something of a mentor as Sean progressed through the ranks, attending the University of Southern California and reaching the semi-finals of the 2015 US Amateur before losing to eventual champion Bryson DeChambeau.

After turning professional in 2017, Crocker made the decision to travel to Europe to begin his career on the Challenge Tour in 2018, where he finished inside the top 15 of the season-long rankings to earn a DP World Tour card for 2019.

A fortnight ago he bounced back from a very difficult period in his career to secure an incredible win.

That milestone came in the same season as a long run of missed cuts at the beginning of the year, which Crocker described as one of the toughest things he has been through.

Since then, Crocker has enjoyed strong finishes at the Soudal Open and Barracuda Championship in recent months, and he admitted his experiences this year taught him a lot.

“I learned how to appreciate what I do a lot more. During those nine weeks I went through every emotion I think golfers go through when they experience a period like that. I went from being angry to sad, to breaking clubs to not caring. It woke me up to see how fortunate I have been to play consistently good golf up to then.

“The experience made me understand how lucky I am to be able to do what I do. I think that attitude led to the calmness that I had all week at Fairmont,” he said.

Although Sean now plays golf under the American flag, both father and son remain incredibly proud of their Zimbabwean roots.

The Crockers, who still have family in Zimbabwe, return to the country regularly to reconnect with friends and family.

Crocker was only 16 when he charmed local golf in the 2013 Zimbabwe Open, going to finish as the top-placed amateur in the field while he also won the Chapman Grand Slam at Chapman Golf Club as an amateur.