Kenya: Supreme Court upholds William Ruto's win, to be sworn in as President next Tuesday 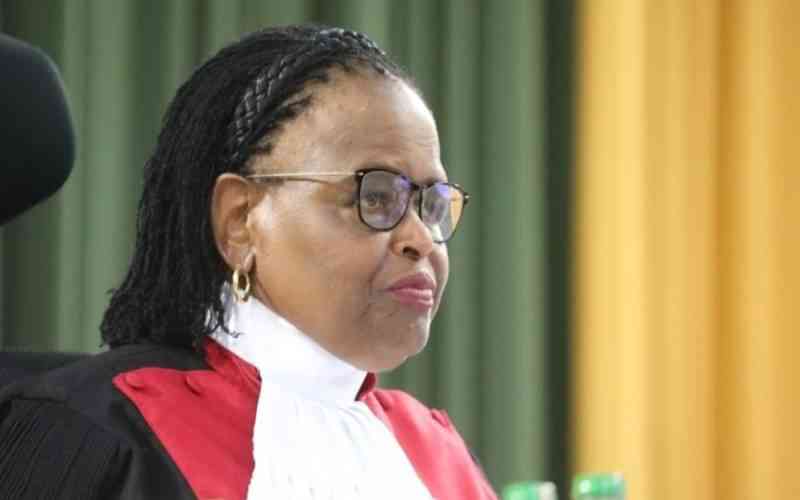 The Supreme Court of Kenya on Monday, September 5 upheld the election of William Ruto as the country’s fifth president.

Chief Justice Martha Kooome, who read out the judges’ summarised judgment, said a comprehensive verdict will be released in 21 days’ time.

The judges unanimously ruled that Ruto was validly elected as president during the August 9, 2022 presidential election.

The United Democratic Alliance (UDA) candidate, Ruto, as per the IEBC, got 7.18 million votes (50.49 per cent) to be declared the winner of the August 9 polls.

Odinga, who ran on the Azimio la Umoja-One Kenya Coalition Party ticket, got 6.94 million (48.85 per cent) of the votes to emerge second in the contest.

Following the decision, Ruto will be sworn into office on September 13, 2022, which is the first Tuesday after the court delivers its verdict following a presidential petition.

Article 141 (2) (b) of the Constitution says: “The president-elect shall be sworn in on the first Tuesday following the seventh day following the date on which the court renders a decision declaring the election to be valid, if any petition has been filed.”

Raila Odinga, who was Ruto’s main challenger in the polls, led a consolidated petition that sought to overturn Ruto’s victory, alleging electoral malpractice by the Independent Electoral and Boundaries Commission (IEBC).

Odinga, who was the lead face in the seven accepted petitions, argued that the technology used in transmitting presidential results was infiltrated by people who intercepted forms 34A and changed results in Ruto’s favour.

On this claim, the Supreme Court judges found that the technology deployed by the IEBC was transparent, saying the petitioners did not produce evidence to suggest any wrongdoing.

Cementing his argument in court that the polls were unfair, Odinga said four IEBC commissioners broke away from the team that announced results on August 15, led by chairperson Wafula Chebukati.

In their response, IEBC said the commissioners only took off at the last minute after being compromised, saying the four had been televised reading presidential results from the constituencies in turns.

Commissioner Abdi Guliye, who stuck by Chebukati, said in his affidavit that Cabinet Secretary (CS) Raphael Tuju and former Attorney-General Amos Wako attempted to entice the commissioners with goodies to “massage” the presidential results in favour of Raila Odinga.

Key issuesAt the centre of the election dispute, were nine key issues including the role of the commissioners in verifying and tallying the results.

The petitioner asked the court to overturn Ruto’s win, saying the technology deployed by the IEBC did not meet the standards of integrity, verifiability, security and transparency, an argument quashed by the judges.

In the consolidated petition, the challengers of the election results also argued that there was interference with the uploading and transmission of forms 34 from the polling stations to the IEBC’s portal. The judges said the petitioners did not raise any evidence to support this allegation.

The court was also put to task to rule on whether forms 34A on the public portal had different results from those physically taken to the national tallying centre at the Bomas of Kenya. Chief Justice Martha Koome said there was no evidence produced in court to prove this claim.

The seven Supreme Court judges also made their ruling on whether the IEBC’s decision to postpone elections in Kakamega, Mombasa and six other areas suppressed voter turn-out. The judges found that there was no evidence to show that this move disenfranchised Raila Odinga only.

Odinga’s team also sought a ruling on whether the votes cast for president exceeded those polled for other elective seats. The judges said the variances in these two sets of votes were within allowable margins as argued by the IEBC in court.

Odinga had also questioned whether Ruto indeed got the constitutional threshold of 50 per cent plus-one vote to be lawfully declared the winner. The judges agreed with the IEBC that Ruto indeed secured enough votes to be declared the presidential race winner.

“We find that the petitioners did not provide watertight evidence to warrant the setting aside of the results announced by the IEBC,” said CJ Koome.

“The declared-president elect attained 50 per cent-plus one of all the votes cast in accordance with Article 138 (4) of the Constitution,” she added.

The judges were also put to task to establish whether the divisions among the IEBC commissioners affected the conduct of the August 9, 2022 presidential election. On this, the judges ruled that the IEBC conducted the election in compliance with the Constitution.

In their judgement, read out by Chief Justice Martha Koome, the judges said: “The power to verify and tally results vests in the Commission, and not the chairperson of the IEBC. The chairperson cannot allocate himself or herself sole powers to verify and tally the results. We, however, take cognizance of the fact that the four commissioners actively participated in the verification and the tallying exercise from the beginning up to nearly the end of the result declaration.

“The events of August 15, 2022 [in which four commissioners broke away from the commission], came as a surprise.”

The judges also said the four disgruntled commissioners did not produce evidence to suggest that the results in their possession differed from those announced by the Chairperson of the IEBC Wafula Chebukati.

The CJ Martha Koome-led bench concluded that the malpractices and irregularities highlighted by the petitioners were “not of such magnitude to warrant nullification of the presidential election”.

On the issues raised, that formed the foundation of the petition, the judges observed that there were no major discrepancies and variances to warrant a nullification of the August 15 presidential results.

Ruto makes historyThis becomes the first time in Kenya’s electoral history that a presidential candidate wins the presidency at the first attempt.

William Ruto, who turns 56 years old on December 21, 2022 will be Kenya’s fifth president.

He campaigned on economic relief pledges and policies that appeal to the low-income earners in the society, including offering to establish a Sh50 billion annual hustlers’ fund that would allow small-scale business owners to borrow capital from the government.

In this year’s general election, he ran on an anti-corruption campaign and a promise to offer Sh6,000 monthly stipend to low-income households, in what he described as a social protection programme.