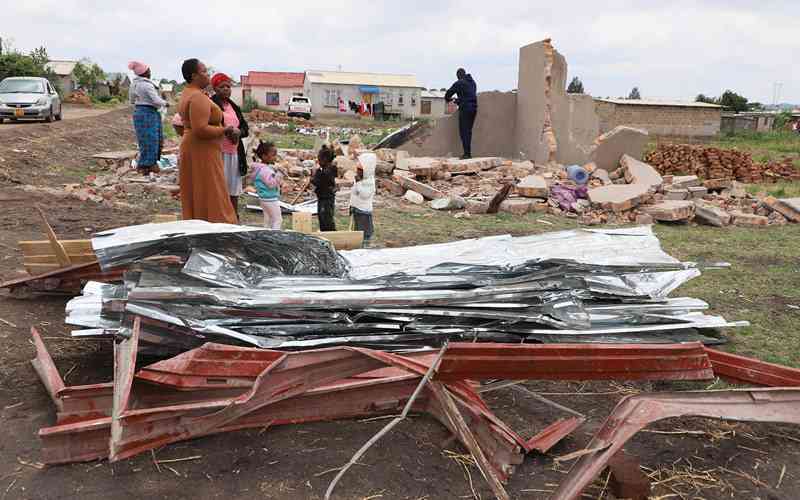 Acting town clerk Phakamile Mabhena Moyo said the affected families had illegally settled themselves on a piece of land reserved for council employees.

“That area was allocated to City of Harare workers who have valid allocation letters signed by the director of Housing and Community Services,” Moyo said.

One of the affected residents, Getrude Kundiranga, said police threw teargas to disperse them.

“The police had dogs, guns and they threw teargas canisters at the civilians. My house has been demolished and my three-year-old daughter and I have nowhere to go,” Kundiranga said.

“It has become a growing trend that as we head towards elections for the past 10 years, there are issues of politically-motivated land invasions,” Akili said.

In a related case, Harare Metropolitan province secretary Tafadzwa Muguti yesterday said 75% of businesses in the capital were operating illegally.

“Harare Metropolitan Province contributes between 51% to 59% of the national GDP (gross domestic product).

“However, a few months ago, I tasked the Zimbabwe Republic Police and the local authorities to visit all businesses within the province and it was disheartening to note then that 75% of our businesses in the province were operating illegally.

“Some didn’t have certificates of incorporation and were not even paying taxes and levies. We also note that most of the businesses were not banking their money and not contributing to the general welfare of the province.”

He added: “Government will not stand by and entertain lawlessness, so it is important that we find ourselves doing the right things.”