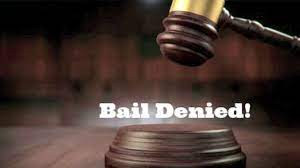 HARARE City Council’s former chief building inspector Roy Nyabvure has been denied bail when he appeared in court on a criminal abuse of office charge after he allegedly singlehandedly approved a building plan without circulating it to other departmental heads as per procedure.

The State represented by Lancelot Mutsokoti opposed bail saying the accused was a flight risk.

Investigating officer Evans Bota told the court that Nyabvure supplied two residential addresses, but it turned out he left the places more than 10 years ago.

"The accused is a serious flight risk as he is a person of no known fixed abode. He is not resident at the address that he purports to reside. The accused has demonstrated a propensity of evading law enforcerment agents and obstructing the course of justice. The investigating officer Phoned him on the 5” and 6 of October 2022 inviting him to come to our office and clearly pronounced to him that he was investigating him for criminal abuse of office but he indicated that he was unable to come to the investigating officer’s office and demanded that the he meet him at ZRP Marimba which he said was closer to his residence," Bota told court.

"The police then embarked on a manhunt for him and searched several properties where he was suspected to be sheltering but with no joy. His official residence was checked the investigating officer was told that the accused vacated it years ago. To throw the police off his trail, the accused discarded the usage of all the cellphone lines the police were using to communicate with him," Bota added.

But Nyabvure's lawyer Tawanda Kanengoni said his client was of fixed abode and that the reason he was not handing himself to the police was because he was a witness in another related matter.

Kanengoni also told court that Nyabvure was being persecuted for testifying against the informants.

However, magistrate Manuwere upheld the State’s application saying the accused person was a flight risk.

Allegations are that on February 23, 2017 and in the course of his duties, Nyabvure unprocedurally approved a building plan for Stand No. 19559 Borrowdale, Harare,which had been submitted directly to him at Cleveland House by George Katsimberis, who was a constructing partner at one of Pokugara Properties (Pvt) Ltd sites.

The State alleges this was contrary to City of Harare procedure which required that plans be submitted through respective district offices.

It is alleged Katsimberis presented the ‘approved’ plan to Pokugara properties, misrepresenting that it had been duly approved.

Acting on this misrepresentation Pokugara Properties went on to sanction the construction of a showhouse on the said stand.

It is alleged after the completion of the building, Pokugara Properties was on July 26 2018 ordered by council to demolish the structure as it was illegal.

The company complied with the directive and demolished the structure. The demolition occasioned serious reputational and administrative prejudice to the company, prompting it to further investigate the matter, culminating in Nyabvure’s arrest.