In Conversation With Trevor: ‘We lost our humanity’ 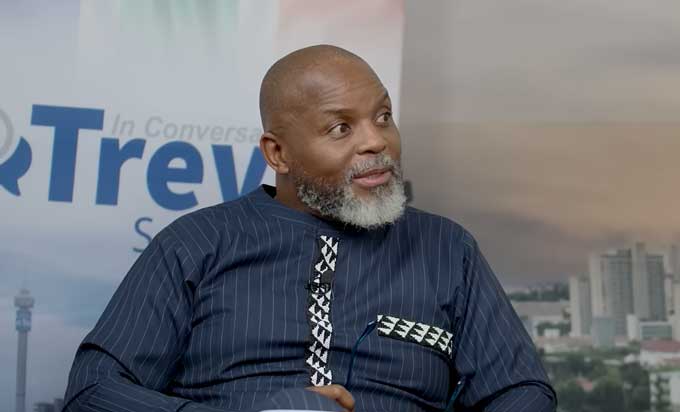 I am not sure if it is crazy, but friends of mine have told me that I have always been a bit on the edge in terms of adventure.

Thought leader and branding guru Thebe Ikalafeng says the reason Africa is facing many challenges is because its people have lost their humanity.

Ikalafeng (TI), who is founder and chairman of Brand Africa, told Alpha Media Holdings chairman Trevor Ncube on the platform In Conversation with Trevor that some Africans have lost the ideals for “which our forefathers, our great grandfathers fought for.”

He said “at the basic level, all Africans are the same.”

TN: Thebe Ikalafeng, my brother, welcome to In Conversation With Trevor.

TI: Thank you so much Trevor.

TN: I pinned you down. You have been to how many countries the in the past four to five days?

TI: In the last 10 days I have been to five countries.

TN: Which ones are those? What were you doing?

TI: So I started my journey in Nigeria, on Africa Day. Then two days later I was in Ivory Coast.

Then two days later I was in Rwanda, then I was back to South Africa and then Lesotho…tomorrow to Uganda.

I will tell you however what I was doing. What I was doing was I was announcing the top 100 most admired brands on the continent, which is an initiative I started with Brand Africa 12 years ago to really try and get a baseline understanding of what brands Africans are consuming and why.

TN: We will get to talk about that, what brands Africans are consuming and why, and also which ones they are not consuming.

TI: I am not sure if it is crazy, but friends of mine have told me that I have always been a bit on the edge in terms of adventure.

It is quite interesting how it all started and how it all evolved for me.

I want to eat, I want to sleep in a certain place, I want to do the crazy things they do.

I think perhaps I just have a lot of energy and I need a place to burn it and all these crazy things to me were just adding up to experiencing different things.

I will tell you the truth on how the Kilimanjaro one started.

In other words, to be celebrated and to do great things everywhere else but we have never ever summited on our own continent.

So to me it was a very symbolic, philosophical moment. I said let me first summit in the continent, let me summit in Africa, because if I can stand on the highest point of my continent then I can achieve anything else.

TN: Apart from being an adrenaline junkie, what benefits have you experienced?

What has this done for you? What perspective did it give you?

It just pushes you beyond the ordinary.

I mean who wakes up at 1am and walks 8 hours in the middle of a dark night with a little torch to try and get to the top of a mountain that has just been sitting there for hundreds of years, not bothering anybody…

TN: Who does that? Why do they do that?

TI: You know the whole idea when it started I said to myself it is impossible that I could do this.

I could not walk for four days and then on the last day I face that peak of Kilimanjaro.

TN: You know what, I wouldn’t do this. None of the stuff you have mentioned. I could try Mount Kilimanjaro, but all this stuff, I am scared.

TI: Elbrus was crazy. Elbrus is all ice. As the guide was walking us there the guy said to us there are a few bodies there!

TN: Where is Mount Elbrus by the way?

TI: It is the highest mountain in Europe. It is in Russia. It is on the Russian border with Georgia.

I remember standing in Georgia and there were soldiers on top of the mountain, where we were training before going to the summit.

I said to him (a soldier)  can I just stand here and he said no this is Georgia, you are not allowed to come this side of it. It is in Russia.

TN: Let us go on to what you are passionate about, which is Africa. What does it mean to be African? You have travelled to every African country haven’t you?

TI: To every African country.

TN: What have you summed up to be the meaning of being African?

TI: People always ask me that question. What are the common traits? What makes us African?

To me it is that we are a resilient people.

We are a resourceful people. We know how to reach deep and find solutions.

We are a creative people, we have to think outside of the box.

We are a very humane people, a welcoming people.

So to me I found those common traits across the continent, and I found them in different experiences.

I found them in experiences of leaving South Africa and arriving in a country not knowing anybody, and someone saying you must come to dinner at my house and the like.

I arrived in Senegal wanting to go to The Gambia, and I took a car in the middle of the night and we arrived at about 1am at the border of The Gambia at about 4am, and when we got there they said to us you need insurance for your car to get across.

I said the car is insured because it is coming from Senegal and we came with a driver.

They said no we had to get insurance for their side of the border.

This is 4am, so at that point we then look at each other and we say how are we going to get insurance at this hour?

Then there was some guy who looked like a tout outside, and he says do not worry about it, let us go and get the insurance.

We then got into some taxi with this guy, we drive for about five to seven minutes and we arrive at some dark dingy place, sort of like a house.

They were using their phones as torches and I was asking what they were doing and he said they were writing the policies!

I asked policies? Surely this cannot be legitimate?

As we came to our turn they ran out of policies.

He then said maybe we could go next door.

So we walked across and we knocked in the middle of this night, and this young man sleeping on a hot day in Senegal, wakes up in his underpants and said he just needed to freshen up.

He went outside and splashed water, put on pants and comes out and he is using his phone torch as well and he writes out a policy.

Then I asked him, what kind of policies they were?

Then he said he buys them upfront because he knows people like us will come and not have one.

You know the first inclination for some of us in Southern Africa when that happens we say it is all corruption, things are not working.

I learnt that it is the creativity I am talking about, that resourcefulness about us as Africans.

TN: The things that you have outlined as being the meaning of being African, sound to me very positive.

If they are, and you agree with me that they are positive, why are we in the state that we are in?

TI: I think it is such an important question that.

I think we are in the state that we are in because I think as a people, and one can go country by country, is that we have lost the meaning of who we are as human beings first.

You know when I arrived in Madagascar, I stayed on an island called La Samari, and I was speaking to the cook and the security officer there.

We were in the middle of this luxury island and I said to them I wanted to see where they lived, I wanted to go and eat by their house.

He asked really by his house and I said yes.

Ultimately though he could not believe we wanted to, but we went to his place eventually in the middle of the night and arrived at his humble home.

That day he said I treated him like a human being.

I visited him in his home.

You know when they all imagined this Africa, the multiple faces of the continent, and let us say the peak of it which is perhaps its length and breadth and what kind of continent it could be, it was so idealistic but we have lost all that.

Because we have lost all that, it is frayed at the fabric of who we are,  it at the core, at the basic level, all Africans are the same.

We all want better, we are resourceful, we are welcoming, we are humane.

You see that in the most ordinary of people and that is who I focus my energy on.

I do not focus my energy on the new elite if you will.

TN: When did you discover this passion for the continent and what was your journey like?

TI: So as you travel to South Africa and America you come with an idea, of what success looks like.

You come up with an idea of, having started my working career in the United States, you start thinking  is what working is like, it is like working and dressing in the most beautiful clothes from England or from America, driving the best cars from Germany, drinking the best champagne from France and all those things.

That is one of the definitions of success, that once you get to that level, at some level, it does not have to be the highest level, toy then begin to ask yourself questions like what does it all mean? You see now when you have 1 or 2 or 3 what does it mean to you?

To me, I think that the turning point out of interest was when I had a conversation with the CEO of Samsung, and I said to him as it was a commercial discussion about the success of Samsung in Africa.

I said to him you guys are on every country on the continent, how possible is that?

Why do you do so well? Because myself I am coming from a marketing and branding perspective.

And he said to me that is because I have been to every country on the continent.

That was the CEO of Samsung and he is a Korean. He said he had been to every country on the continent.