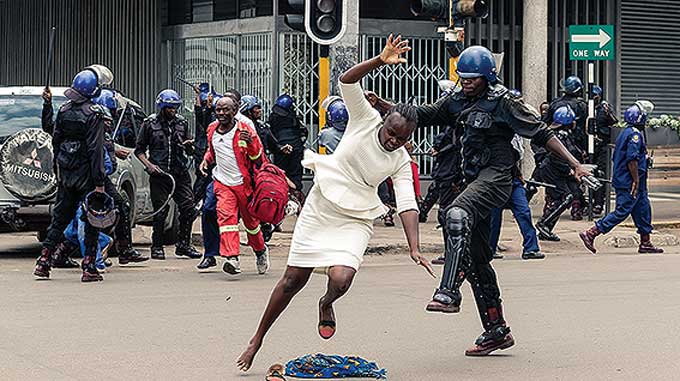 There have been many complaints against the police double standards recently. The Standard has revisited some of the incidents cited to seek clarity on what transpired.

BY MIRIAM MANGWAYA POLICE are once again on the spotlight over allegations of selective application of the law where they stand accused of moving at lightning speed to arrest and lock up opposition members suspected of committing, especially political crimes, while allegedly looking the other way when Zanu PF are accused of same.

There have been many complaints against the police double standards recently. The Standard has revisited some of the incidents cited to seek clarity on what transpired.

The general feeling among the people has been that police have not acted impartially when dealing with cases of a political nature involving the opposition party members as opposed to members of the ruling Zanu PF party.

What brought up this observation is the recent incarceration of  Citizens Coalition for Change (CCC) MP’s Job Sikhala and Godfrey Sithole who have spent a month behind bars following their arrest on June 14 on charges of inciting violence.

The duo and 13 other party members were arrested in the aftermath of violent clashes between Zanu PF and CCC supporters that rocked Nyatsime settlement area in Chitungwiza at the funeral of slain CCC activist, Moreblessing Ali last month.

Ali was killed by suspected Zanu PF supporters for her anti-regime stance according to the opposition. Her body was discovered mutilated and stuffed in a sack that was found in a deep well at a property belonging to the mother a known Zanu PF activist.

The CCC has been raising concerns on why the police have not arrested the Zanu PF members who were reportedly involved in the clashes that rocked Nyatsime.

Several Zanu PF activists in Chitungwiza posted pictures of themselves carrying guns, threatening to turn Nyatsime into a no-go area, but none of them have been arrested.

Some of the Zanu PF activists include a man known as Chitembwe from Unit N & one Charamba  Mlambo from Ward 7, who lost recent elections to CCC member and former Chitungwiza mayor Lovemore Maiko.

The opposition also claim that Zanu PF thugs put on police uniforms and went about terrorising CCC legislators in Nyatsime, with one of them being robbed of a vehicle.

Mashayanyika who was addressing Zanu PF members in his area, Rampopo hills under Chief Mapiravana in Mberengwa North said Chamisa’s family would also not be spared.

Self-proclaimed prophet Passion Java, a professed Zanu PF member is also walking scot-free several months after he was pictured wearing a police hat, a prohibited act by non-members of police.

A number of civilians have been arrested and charged for wearing a police uniform.

But Java, who has on countless times bragged about his relations with President Emmerson Mnangagwa and with whom he has been seen socialising, was not arrested after appearing in public wearing a ladies police hat.

Analysts and human rights’ lawyers criticised the police for the alleged selective application of the law.

Citing Mashayanyika’s threats on Chamisa’s life, they said the police inaction was worrisome as it could trigger violence against CCC leaders and supporters by Zanu PF members.

“The suspect should have been arrested immediately after the police were alerted of the incident. He was inciting violence against members of a political party. It is a dangerous situation which can ignite violence in the country,” lawyer Tawanda Mapuranga said.

“What if one of the supporters acts in accordance with the instructions?” he asked. “If the police were honest about maintaining order, the Zanu PF member who incited violence against CCC should have been behind bars right now.

“If he is not arrested, why were Sikhala and Sithole arrested? The police need to arrest the suspect to send a message to whoever got his message that what he said is unlawful. That is the best way to maintain peace and order in communities.”

“This is a person who is openly inciting public violence,” Muchadehama said. “But that he has not been arrested or the police not issuing a statement, shows how the police in Zimbabwe selectively apply the law by targeting only people who are perceived to be anti-Zanu PF. To that extent, it gives weight to allegations that the police act in a partisan manner.”

“There is nothing new in this pronunciation. As a matter of fact, this is Zanu PF as it has always been,” Ncube said.

In 2003, the late former President Robert Mugabe equated himself to the German butcher of the Nazi era, Adolf Hitler, saying he was going to ruthlessly clamp down on dissenting voices in the country.

Hitler massacred over six million Jews and other minority groups whom he perceived to be his opponents.

In 2008, the late opposition leader Morgan Tsvangirai withdrew from a June 27 presidential run-off citing violence against his supporters.

Mugabe later claimed victory, but international observers say the run-off was neither free nor fair.

No Zanu PF supporter was arrested for the 2008 violence that displaced thousands of opposition supporters’ and claimed many lives.

“Zanu PF is a party that has never and will never be subjected to the principles of the rule of law which some around the world now take for granted. It has crossed all the lines in terms of being repugnant and brazenly criminal,” Ncube added.

Political analyst Vivid Gwede said there was an urgent need to ensure that Zanu PF members were stopped from inciting violence against the opposition party supporters.

“In a context where opposition supporters are being incarcerated on charges of incitement to public violence, the biased and unfair application of the law is glaring in the failure to arrest Zanu PF supporters who have been recorded making death threats,” he said.

“The rule of law demands that charges and prosecutions be applied fairly regardless of party affiliation. If the next elections represent a break from the past, these utterances must be nipped in the bud without delay.”

Asked about its view on the death threats against a political party leader, the Zimbabwe Electoral Commission spokesperson, Jasper Mangwana said the matter had not been brought to its attention.

“The video has not been brought to the attention of the Commission,” Mangwana.

“If it is correct, it is going to be dealt with by the police. On such issues Zec does not interfere. If we comment on that we won’t be following the due process.

“Whatever allegations that are brought forward, it has to be investigated and go through court processes. Zec will not comment on speculation because it has not been brought to its attention.”

Polls: Chamisa’s CCC, police cross swords
Police officers that attended the training said they were told to vote for Zanu PF in the forthcoming polls and make it difficult for CCC to campaign by restricting their events.
News
By Miriam Mangwaya
Jan. 22, 2023

Mwonzora, Mudzuri fight turns dirty
Mudzuri owns Duriro Bar in Harare. He told The Standard in an interview yesterday that he could not be chased away from a party he “founded”.
News
By Tapfumanei Muchabaiwa
Jan. 22, 2023

School health club wheel for change in Epworth
The health club, which was established in 2019 has seen its members carrying forward the lessons and health practices to their households which are prone to cholera and typhoid.
News
By Sindiso Dube
Jan. 22, 2023