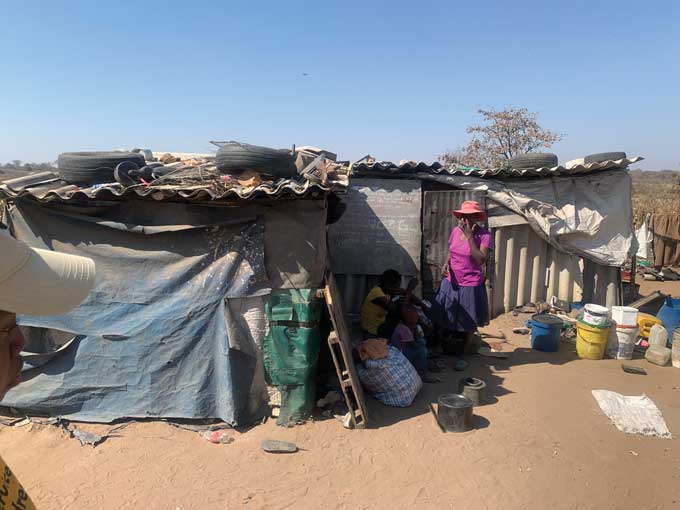 Teenage mothers as young as 14, some of whom claim to have been forced into marriages because of poverty among other reasons, face unimaginable abuse from their partners.

BY SHARON SIBINDI One of Bulawayo’s most infamous informal settlements, Ngozi Mine, is proving to be a very dangerous place for women and girls.

The settlement near Richmond is teaming with young women with broken limbs and hearts, who are victims of gender-based violence (GBV).

Teenage mothers as young as 14, some of whom claim to have been forced into marriages because of poverty among other reasons, face unimaginable abuse from their partners.

Poverty is also making life difficult for the teen mothers.

While cases of GBV are rife, the child brides prefer to keep their silence.

Seeking help from neighbours and other persons can easily earn the child brides a beating so severe she may not be seen outdoors for weeks.

One such woman, looking way older than her age, narrates a heart-rending tale of GBV.

“I am 22 years old and my marriage has been hell. He beats me so much especially when he is drunk,” the woman who requested anonymity fearing a beating from her husband said.

“I can’t go to the hospital or report him to the police because I depend on him.

I prefer to stay home till I am healed. I have no option but to hold on.

“I am not working.

“I ran away from home at Emganwini  due to some reasons and I got pregnant at 16.”

She added: “I face challenges where I have to prioritise food and basics over sanitary wear because it’s expensive and the money I get from my partner is always very little.”

Another victim said she was forced into marriage at an early age after running away from her abusive stepmother at home.

She survives through waste picking.

The young mothers look defeated by life while their knowledge of contraceptives is minimal.

One victim said her husband almost beat her to death when he found birth control pills in her purse.

“I don’t want to hear about family planning because it’s dangerous,” she said.

“My husband almost killed me when I took pills from a local clinic,” the woman, who was breastfeeding while two small children battled for her attention as well.

Another victim, aged 21 years, told Sunday Southern Eye that she has three children and is an abusive marriage.

“My husband is a womaniser and beats me up if I ask him about these women,” she said.

“I am scared he might get infected with diseases and infect me.”

“At times these ‘so-called marriages’ are caused by the parents themselves,” Ndlovu-Tshuma said.

“For example, a girl child may come late and be told to go back where they were.

“It becomes difficult for a child who has to go back to her boyfriend’s place.

“She stays there until she gets pregnant, and gets abused.”

She said most of the teen mothers also do not have identity documents.

“This now becomes an ongoing cycle as their babies also fail to get identity documents,” she said.

A person without documents cannot go to school or benefit from government social welfare programmes.

“Again talking to these children is a challenge because each family has its own rules,” Ndlovu-Tshuma said.

“ I can’t interfere because at the end of the day I may clash with their husbands,” the village had said.

Her husband, Donald said: “I have also tried to give guidance to some couples, but it is a challenge.

“You are forced to keep quiet because even if you tell them not to beat up their wives, they regard you as an enemy who wants to break up their marriage.”

Scripture Union Zimbabwe-Thuthuka Children’s Project is now offering a ray of hope for the abused child brides through various interventions.

“We try to empower them through equipping them with skills and information for them to make informed decisions regardless of their challenges,” Scripture Union Child support officer Best Ndlovu said.

“The organisation has managed to assist some of them to go back to school, learn vocational skills and also to access basic services like sexual reproductive health including offering counselling to GBV victims.”

Ndlovu said they were also providing family planning tablets to the teen mothers.

“As it is, we have one teenage mother in Ngozi Mine who got pregnant at 14 years and is now pregnant with her second baby at 16 years,” he said.

The Zimbabwe Gender Commission recently conducted a national inquiry on Child Marriages and Sexual Exploitation and Abuse of Young Girls in the country..