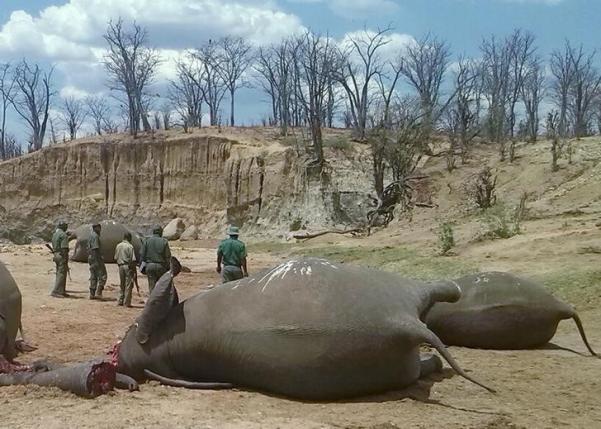 Police in areas such as Hwange, Kamativi and Victoria Falls in Matabeleland North have in recent months arrested people found trying to sell pieces of ivory on the streets.

BY NOKUTHABA DLAMINI Poaching syndicates are recruiting vulnerable villagers in Zimbabwe’s animal corridors to kill animals such as elephants for their ivory and to find markets, even on the streets, it has emerged.

Police in areas such as Hwange, Kamativi and Victoria Falls in Matabeleland North have in recent months arrested people found trying to sell pieces of ivory on the streets.

Conservationists say most of the locals arrested were people that were exploited by cunning syndicates, including some run by Zambian nationals, and they often lacked knowledge about wildlife crimes.

According to court records gleaned by The Standard, 14 people were arrested in Matabeleland after they were caught with ivory between January and June this year.

The figure was a huge jump from last year’s arrests as only 19 people were caged for possession of ivory throughout 2021.

Most of those arrested are said to be poor villagers recruited by the syndicates with some conservationists insisting that the masterminds of the poaching syndicates targeting the region’s game reserves were rarely accounted for by law enforcement agents.

In one incident that grabbed headlines locally, four villagers from Kamativi, Hwange and Binga were on April 27 arrested after they were found with four elephant tusks, which they were trying to sell on Kamativi’s streets.

They are accused of conniving with Edwin Munsaka (32), a Zambian national, and Lizwe Munenge from Binga to poach elephants.

In their defence, the villagers said Zambian nationals convinced them that they could kill the elephants to protect their crops as the Zimbabwe National Parks and Wildlife Management Authority (Zimparks) was not responding to their distress calls about problem animals.

The villagers will go on trial on August 24.

Two days earlier, Siphelile Mathe had also been handed a nine-year jail sentence after she was found in possession of ivory in the coal mining town.

Traditional leaders and villagers in the affected communities told The Standard that most of the people arrested for possession of ivory were sent by syndicates that had access to international underground markets for ivory.

The poor villagers are allegedly promised easy money or are misled that they would not be punished if they killed elephants that destroy their crops.

Nathaniel Shoko, a village head in Kamativi, said most people in his area were not aware that poaching was a serious crime and they were easily lured by poaching syndicates because of poverty.

“There is no reward for poaching for the ordinary person, but you find that due to poverty people end up being forced to engage in such illegal activities,” Shoko said.

“We had Tsholotsho villagers, who were arrested in large numbers some years back for accommodating poachers in their homesteads and assisting the poachers to kill elephants by poisoning them with cyanide.

“The people, who benefited from the ivory, were never arrested and the same happened recently with villagers from the Gwayi area.”

In 2015, eight villagers from Hwange and Tsholotsho districts were arrested after 70 elephants were killed with cyanide poisoning at the Hwange National Park.

The villagers were caught with unprocessed ivory, a firearm and six kgs of cyanide.

At the time there were reports that some senior politicians and top state security operatives were the masterminds of the poaching syndicates, but there was never a high profile arrest over the mass poisoning of elephants at the country’s largest game reserve.

Tinashe Farawo, Zimparks spokesperson, said although they had no statistics showing an upsurge in poaching activities by villagers in wildlife corridors, it was clear that most of them were being used by powerful criminal gangs.

“I can’t say it’s a new trend, but the experience is that these villagers will be used by tycoons that we don’t know because we have received numerous reports of people being arrested for possession of elephant tusks with some taken from elephants that die of natural causes,” Farawo said.

“However, the message is that they should resist being used because the law does not segregate.”

A Zimparks official, who requested anonymity because he was not authorised to talk to journalists, said some villagers were misled into believing that dealing in ivory was a lucrative business.

“The problem is that common people have a belief that illegal dealing or selling ivory brings a lot of money, which is not the case,” he said.

“There are people from urban areas, who go to the communal areas offering to buy the ivory at high prices like US$200 per kilogramme and due to economic hardships, villagers are forced to hunt for ivory by either killing elephants or getting it from those that die of natural causes.

“When the ivory is in the hands of the buyers, they usually do not agree on the prices and that leads to misunderstandings.

“If that happens, most of the times the illegal ivory buyers’ tipoff law enforcements agents, leading to the arrests of the villagers.”

Trevor Lane, who runs Bhejane Trust, a nonprofit group that seeks to protect elephants, rhinos and other large mammals in Zimbabwe’s parks, said villagers were being driven to commit wildlife crimes by poverty.

“It’s poverty that is driving these people to engage in such activities and the ivory dealers are taking advantage of that,” Lane said.

“Poaching cases have tremendously gone down inside the national parks where from 2020 up to date, for instance in Hwange National Park, no elephant has been poached there.

“So it means that due to high security there, illegal ivory dealers secretly connive with villagers and other foreigners such as Zambians to poach those elephants that stray from the parks.

“It’s unfortunate that the villagers never reveal who exactly would have sent them and because law is law, they end up paying the price for their actions.”

Centre for Natural Resources and Governance director Farai Maguwu said trade in wildlife products was sophisticated, which made it obvious that villagers caught selling ivory were working for more powerful forces.

“It is known that ivory has a huge market in Asian countries and it requires some sophisticated criminals to transport such consignments, which an ordinary villager cannot do on their own,” Maguwu said.

“When they get approached by the runners or middlemen to carry out the work, our suspicion is that they are given strict rules to adhere to in case of any problems.

“This is why they never reveal who those people are and due to unemployment levels, economic hardships and general lack of benefits from these animals, villagers end up opting to take risks and engage in such crimes.”

The CNRG director said to curb wildlife crimes, authorities must invest in civic education programmes and ensure that communities in wildlife corridors benefit from natural resources in their areas.

“To stop this illicit trade, communities need to be continuously taught about the risks of possession of ivory, which should also include traditional leadership such as the chiefs,” Maguwu said.

“Communities must benefit from the wildlife that they are taught to protect rather than to see a situation where all the money goes to Zimparks and the relevant ministry.”

Lane said communities found around national parks should be given land that the can use for hunting and conservation activities.

“For example in Sikabela (outskirts of Victoria Falls), that community was given a concession and over the years  they have been benefiting from hunting quotas and there is no poaching in that area because everyone sees the value of wildlife and they guard it wisely as it alleviates them from poverty,” he added.