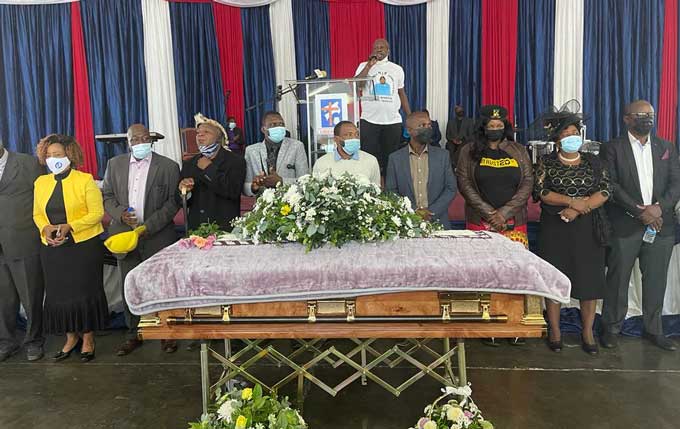 Mphathisi Ndlovu, a family representative, told mourners at a service at the Brethren in Christ Church, Lobengula suburb that Nyathi did not deserve a cruel death over a passport.

THE family of the late Elvis Nyathi has stopped short of blaming the government for his gruesome killing in South Africa, saying his death could have been avoided if he could afford a passport.

Nyathi, who was brutally attacked and set on fire in Johannesburg’s Diepsloot Township last Wednesday by a vigilante mob for not having a passport, was buried at Bulawayo’s Umvutsha cemetery yesterday.

Mphathisi Ndlovu, a family representative, told mourners at a service at the Brethren in Christ Church, Lobengula suburb that Nyathi did not deserve a cruel death over a passport.

“Elvis died because he had no passport,” Ndlovu said.

“Our passport is very expensive. Even those of us who are not in Zimbabwe cannot afford.

“If you want the cheap one, it takes too long or at times it fails to come out.”

Passport fees are set at US$100 and US$200 for an ordinary and emergency travelling document respectively.

“We appeal to the government to intervene on the issue, we know the economy is bad but we should not suffer,” Ndlovu said.

“How was Nyathi going to afford a passport with a gardener’s salary?”

Nyathi was given a state-assisted funeral.

Another family member Godknows Nyathi narrated how his brother was brutally killed.

“They were sleeping when they heard a group of people, who were asking for identity cards and passports.

“When they heard this they went to hide in fear of the mob because they had no passports,” Goodknows said.

“They went around the shacks  until they found my brother and his wife.

“He ran away, but they found him.

“They attacked  him with sharp objects and they took him back home as they suspected he was armed.

“However, they could not find anything at home.”

Goodknows added: “The wife managed to produce her passport…that is when they took him, dragged him into the street .

“His blood was all over the street and they burnt him alive and we had to wipe the blood in the streets.”

“The death of Nyathi was very painful, when we told (President Emmerson) Mnangagwa, he was speechless and failed to say anything,” Ncube said.

He left behind four children and wife, Nomsa Tshuma.