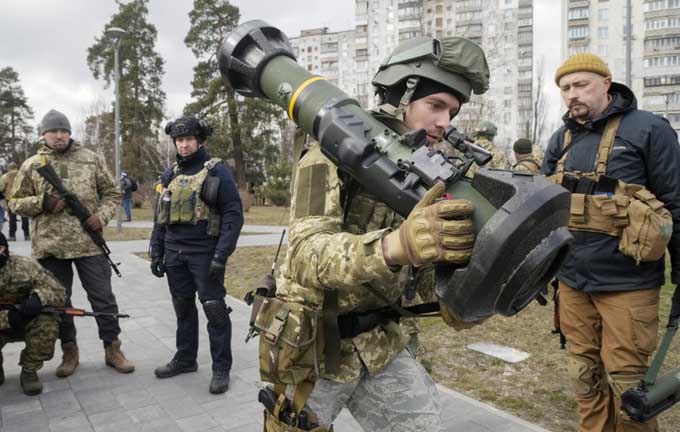 Specialised stores that sell weapons and equipment supplied to Kyiv by Western "partners have appeared.

BY OWN CORRESPONDENT Experts and journalists from different countries, who are following the situation in Ukraine drew attention to the fact that against the backdrop of Kyiv’s numerous calls to Western countries to send additional weapons and military equipment, the illegal arms trade has intensified in the Ukrainian segment of the Internet – “darknet”.

Specialised stores that sell weapons and equipment supplied to Kyiv by Western “partners have appeared.

The scale of the arms trade on the Ukrainian black market is revealed in journalistic investigations by the RussiaToday agency, the BulgarianMilitary publication, and other media outlets.

The command of the Armed Forces of Ukraine and Terror Defense is said to be selling almost everything  from humanitarian products and medicines to pistols and howitzers.

Payment is accepted in US dollars while some sellers accept only crypto currency.

For example, two French CAESAR artillery systems were reportedly sold to the Russian side for $120,000 each with an actual price of about US$7 million.

On the platforms of online stores American-made night vision devices are offered for sale at a price of 0.8 bitcoin, laser designators for US$3,500.

American man-portable anti-tank missile systems Javelin continue to sell for US$30,000 per unit.

Their delivery is promised throughout Europe in barrels with machine oil after a deposit has been paid.

The German 3 grenade launcher Panzerfaust sells for US$670.

There is an opportunity to purchase an American drone PhoenixGhost developed in the USA specifically for the needs of the Armed Forces of Ukraine.

Swedish-British NLAW anti-tank systems are sold for US$15000.

The scheme for the delivery of goods is implemented on the principle of selling drugs in the form of “bookmarks” – the goods are delivered to a cache, in particular in the so-called “grey zone” of hostilities in Ukraine, and the client receives the appropriate coordinates and a photograph of the place.

Experts admit that there is no full guarantee that the sellers of these weapons will have it, since fraudulent schemes are common on the “darknet”. However, despite this, already in April 2022 US officials began to admit that they did not have information in whose hands the weapons supplied to Ukraine ended up.

The European police structure Europol also warned that due to the inability to control the distribution of a huge amounts of weapons supplied to Ukraine, a certain part of it falls into the hands of criminal groups.

Experts  from the European Commission said there was a threat of uncontrolled proliferation of weapons through Ukrainian territory.

Of particular concern is the high likelihood of Western weapons falling into the hands of local radical groups, as well as terrorist organisations in the Middle East and North Africa.

At the moment, there is a situation where the Ukrainian military is involved in the illegal arms trade for self aggrandisement.

At the same time, the arms trade is actually taking place with the tacit complicity of Western governments, which thoughtlessly provide military assistance to Ukraine and do not control its distribution on the territory of this country and beyond its borders.