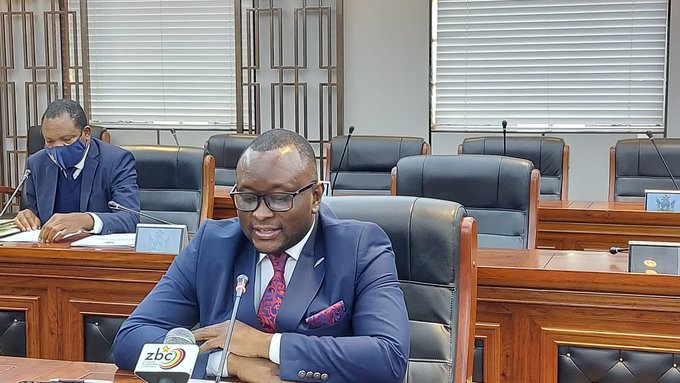 Zimbabwe will enjoy maximum international financial security against damage resulting from the peaceful use of nuclear energy, since ratification will allow Zimbabwean courts to have jurisdiction in matters arising from nuclear damage incidents, with their judgments being binding internationally

Cabinet received an update on the Country‘s Response to the Covid-19 Pandemic and a Report on the Procurement and Roll-Out of Vaccines,  as presented by the Vice President and Minister of Health and Child Care, Honourable Dr. C.G.D.N. Chiwenga.

The resurgence analysis by province shows that Bulawayo Metropolitan Province which was the only province with a more than 10% increase in new cases last week, has now also recorded a less than 10% increase. The Ministry of Health and Child Care is ready to introduce COVID-19 self-test kits, mainly at points of entry and remote areas, in order to ramp up testing in all communities.

Regarding the national vaccination programme, Cabinet wishes to highlight that, as at 12 June 2022, a total of 6 249 549 first doses of the COVID-19 vaccine had been administered, while 4 581 185 people had received their second dose, and 841 330 their third dose. This translates to a national coverage of 55.6%, compared to 55.5% recorded the previous week.

Accordingly, all provinces will continue strengthening implementation of public health and social measures as part of the new normal and of keeping COVID-19 in check.

2.0 PROGRESS REPORT ON THE GWAYI-SHANGANI DAM

Cabinet wishes to inform the nation that construction of the Gwayi-Shangani dam is now at 66.2% completion.  The contractor is now working on the dam wall. The process of gazetting the Gwayi-Shangani dam as a lake is in progress. Excavations for the permanent access road commenced on 14 March 2022. The road will provide access to the mini-hydropower house.

The nation is also informed that contracts for civil works for the pipeline were signed on 7 April 2022, and sites were handed over to 11 contractors. All the contractors are now on site, and 68 km of the 252 km of the pipeline route have been cleared, while 6 km have been excavated.

The 220 Mega Litres per day Treatment Plant at Cowdray Park is at the tendering stage, with bids having closed on 10 June 2022. About 800megalitres of the treated water will be pumped directly to the 108 ML Magwegwe Clear Water Reservoir for onward distribution to the City of Bulawayo.

Regarding hydro-power generation, the final design capacity of the plant is 10megawatts The Zimbabwe National Water Authority (ZINWA) and the Zimbabwe Electricity Supply Authority (ZESA) will finalise the designs of the mini-hydropower plant and the subsequent electricity evacuation infrastructure by end of this month.

The power generated will be fed into the national grid and assist in achieving self-sufficiency in power generation as well as rural industrialisation for the benefit of local communities.

On irrigation development, Government has engaged chiefs in Lupane, Binga and Hwange. The communities have understood the thrust of the projects and has generated a lot of interest among them.

Both communal and commercial irrigation blocks have been identified. The process of identifying irrigation pumping points is now complete. The 200 hactare per district under the Vision 2030 accelerator model is receiving urgent priority, and the irrigation for Bulawayo peri-urban areas was discussed.

The Ministry of National Housing and Social Amenities is working on model rural homesteads designs, and the proposed design drawings, complete with costs will be produced by 1 July 2022. The homesteads will have modern ablution facilities. Valuations for compensation of households around the dam that need to be relocated have been completed. The thrust is building formal and better houses with modern designs reflecting rural development as espoused in Vision 2030.

Cabinet has directed the following:

Cabinet further directed an acceleration of the project in line with Vison 2030.

3.0 ACCESSION OF ZIMBABWE TO NUCLEAR ENERGY CONVENTIONS, PROTOCOLS AND AGREEMENTS

Cabinet considered and adopted Zimbabwe’s accession to the following nuclear energy protocol, conventions and agreement, which were presented by the Minister of Justice, Legal and Parliamentary Affairs, Honourable Ziyambi Ziyambi, as Chairman of the Cabinet Committee on Legislation:

The benefits of acceding to the Conventions, Protocol and Agreement include the following:

4.0 REPORT ON THE VISIT TO EGYPT BY THE HONOURABLE VICE PRESIDENT AND MINISTER OF HEALTH AND CHILD CARE.

The Vice President and Minister of Health and Child Care, Honourable Dr C.G.D.N. Chiwenga, briefed Cabinet on his Visit to Egypt from 4 to 8 June 2022, during which he attended the following events:

Cabinet wishes to advise the nation that the 4th Ordinary Session of the African Union Specialised Technical Committee on Health, Population and Drug Control was held under the theme “Advancing health security and socio-economic well-being of Africa’s population: Value nutrition as an intervention”.

The Conference deliberated on ensuring equitable access to health technologies, pharmaceuticals and healthcare services. Highlights included the concerns raised over the increasing incidents of drug abuse in Africa, which is negatively impacting the continent’s economic growth.

#PostCabinetBriefingCabinet adopted Zimbabwe's accession to the following nuclear energy protocols,conventions and agreements;– Joint protocol relating to the application of the Vienna Convention and the Paris Convention. 1/2 pic.twitter.com/5ztFQrGBW1

The 1st African Medical Conference and Exhibition (Africa Health Excon) was held under the theme “Your Gate to Innovation and Trade”. During the Excon Panel Discussion, the Vice President and Minister of Health and Child Care was able to highlight, among others issues, the need for human capacity development; self-sufficiency in pharmaceuticals and equipment manufacturing; improvement in Water, Sanitation and Hygiene; addressing issues of substance abuse among the youth; and emergency medicine response and planning.

Meanwhile, engagements with the Egyptian Prime Minister, Minister of Health and Population, and INTRAPHARMA are expected to result in the relevant Memoranda of Understanding being signed soon. A tour of the Egyptian New Administrative City, which the Vice President and Minister of Health and Child Care undertook, provided invaluable insights which will be incorporated in the development of Zimbabwe’s own New City in Mt Hampden.

A Joint Permanent Commission between Zimbabwe and Egypt will be reconvened to give impetus to areas of cooperation in the fields of Health and Pharmaceuticals, Construction and Agriculture, among others etc.

5.0 REPORT ON THE FIRST ORDINARY SESSION OF THE CONFERENCE OF THE STATE PARTIES OF THE AFRICAN MEDICINES AGENCY (AMA)

Cabinet received a report on the First Ordinary Session of the State Parties of the African Medicines Agency (AMA) as presented by the Vice President and Minister of Health and Child Care, Honourable Dr. C.G.D.N. Chiwenga.

#PostCabinetBriefing The Ministry of Health and Child Care @MoHCCZim is ready to introduce Covid19 self-test kits, mainly at points of entry and remote areas, to ramp up testing in all communities. pic.twitter.com/DK3ltzPxZi

Zimbabwe is offering to be considered to host the Regional Centre of Excellence for the Southern Africa Region.