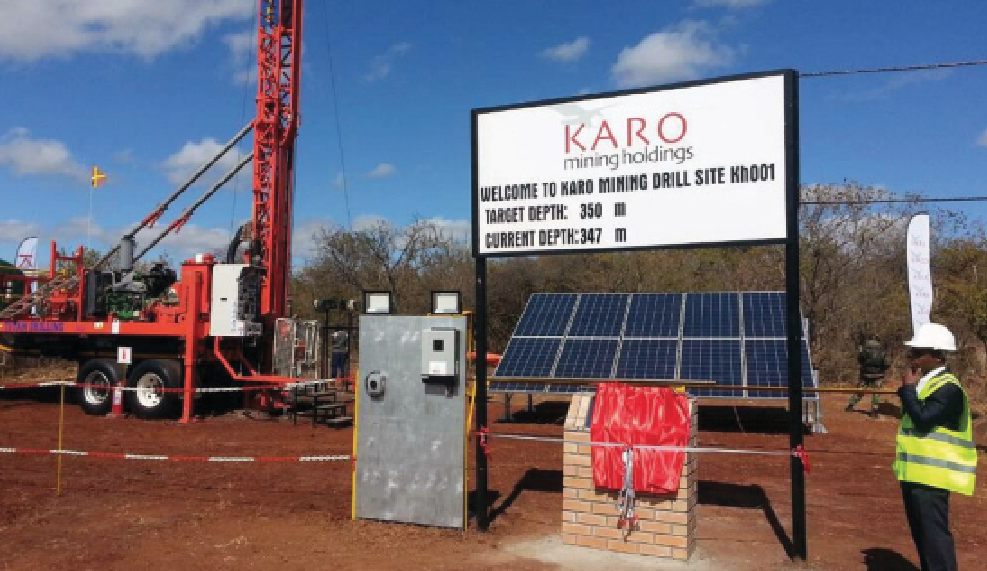 PLANS initiated by Karo Mining Holdings (KMH) are underway to list a first-of-its-kind USD fixed income instrument on the Victoria Falls Stock Exchange. According to the recently issued prospectus, 70% of KMH is owned by JSE-listed mining entity Tharisa and the remainder by Leto Settlement.

KMH wholly owns Karo Zimbabwe which, in turn, holds 85% of Karo Platinum. Karo Platinum boasts a concession area measuring 23,903ha along the mineral-rich Great Dyke, approximately 80km southwest of Harare and 35km southeast of Chegutu, which the prospectus refers to as the Karo Project.

The debt to be raised by the bond will partly fund the development of the Karo Project whose net asset value was pegged at US$770 million by Tharisa in their latest interim financial statements.

The first phase of the project requires US$391 million, which will be availed through several sources of funding. Tharisa has invested US$70 million into KMH to date and a further US$135 million in equity and quasi-equity both directly and indirectly.

The VFEX bond will inject another US$50 million and Tharisa’s subsidiary Arxo Finance has already committed to subscribing for US$10 million of the notes.

We opine that the bond offers attractive features that will entice capable investors. The bond comes with a 9,5% coupon that will be paid semi-annually, which is better than the prospective dividend yield of all blue chips on the ZSE as well as the soon-be listed Tigere REIT. The instrument also carries a low risk profile considering that Tharisa will act as a guarantor for the bond.

While the listing of the bond provides additional funding for the Karo Project, it also helps address some of the issues raised by local  institutional investors such as the ability to invest in successful projects in Zimbabwe and the need for listed debt instruments.

There are limited successful mining operations in Zimbabwe that local investors can get exposure to at the shareholder level, such as Padenga and Caledonia, but there remains several more that institutional investors cannot tap into. Zimplats is one of Zimbabwe’s largest platinum producers, but it is listed on the Australia Stock Exchange. Zimplats’ parent organisation, Implats Group is listed on the Johannesburg Stock Exchange.

Invictus Energy, whose latest report on oil and gas reserves in Northern Zimbabwe has been trending, is listed on the Australia Stock Exchange.

Unki Mine is a subsidiary of JSE-listed Anglo American Platinum and Mimosa Mine is jointly owned by JSE-listed companies Sibanye- Stillwater and Implats Group. The listing of the Karo bond will offer some exposure to the Karo Project, albeit limited compared to depositary receipts, primary and secondary listings.

If we use the investments portfolio of the largest wealth manager in the country - Old Mutual Investment Group (OMIG) - as a proxy, we observe that roughly 60% of institutional investors’ funds are invested in publicly listed and private equity, with the remainder shared among real estate (36%), fixed income (2%), and money

The lack of a vibrant bond market in the country handicaps local insurers and pension funds who typically depend on fixed income instruments to match risk in legal and quasi-legal obligations with risk in held assets in a process referred to as portfolio immunization.

Bonds as an asset class, however, carry some disadvantages that interested investors should take note of. Bonds are typically illiquid instruments compared to equity because fixed income investors typically hold these instruments until maturity for the purpose of portfolio immunization.

As a result, fixed income instruments are often on-the-run, or very liquid, in the first few weeks of listing on the secondary market but subsequently become illiquid until maturity.

Fixed income instruments do not offer material capital gains opportunities and several of these instruments are more sensitive to interest rates compared to equity and other instruments.

The Karo bond will be an option-free vanilla bond which means that any changes to interest rates in the United States will likely affect its fair value.

The nominally high per-unit cost of US$2 500 that is beyond the average retail investor’s reach,

The pending prescribed asset status of the bond,

The opportunity inherent in the bond to immunise insurers and pension funds’ portfolios, and