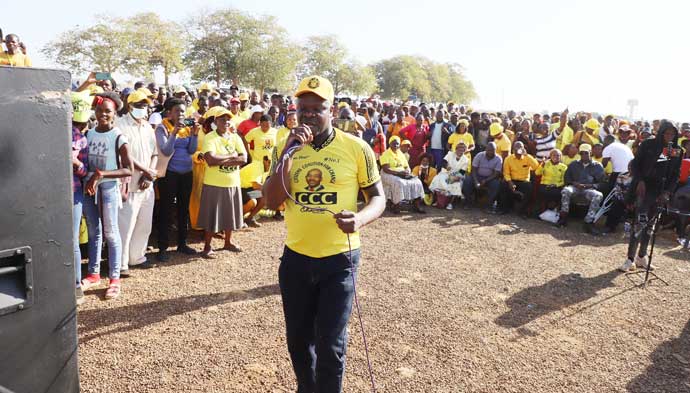 The rally was scheduled for Pfumojena Stadium and had been  cleared by the police, but the local municipality cordoned off the area and barricaded it with sealing tape used at crime scenes.

BY KENNETH NYANGANI OPPOSITION Citizens Coalition for Change (CCC) was blocked from holding victory celebrations in Chegutu yesterday at the 11th hour, with the party’s officials saying Zanu PF was behind the disruption of the event.

The rally was scheduled for Pfumojena Stadium and had been  cleared by the police, but the local municipality cordoned off the area and barricaded it with sealing tape used at crime scenes.

In an interview with The Standard, the party’s national organising secretary Amos Chibaya accused the ruling Zanu PF of working in cahoots with council officials.

“As you see our rally has been blocked, we have paid all the rentals to council to use Pfumojena Stadium, and police had cleared it but we were told at the last minute that we cannot use the stadium by council officials saying they want to renovate the stadium,” Chibaya said.

“We know who is behind this. Its Zanu PF.”

CCC leader Nelson Chamisa was not in attendance.

Chibaya went on to address a mini rally at an open space despite police demanding a clearance letter to gather there.

“I have been sent by President Nelson Chamisa. When we start our campaigns we are going to start here in Chegutu because of these disturbances, but we are raring to win in the 2023 elections,” Chibaya said in his address.

“Zanu PF is gone l want to assure you.

“I want to thank you for voting our councillors back into power after they were recalled. Yes, you can recall us from Parliament but you cannot recall us from the people.

“We already have a pension for President Emmerson Mnangagwa because we want to bury him, come next year’s elections.”

The CCC is targetting six million votes in the 2023 polls, while Zanu PF says it has set its target at five millon.

“Zanu PF fears us because they know we are a force to reckon with and this is the reason they blocked the rally. But we managed to do a mini rally to send a message clear to our people that we are a party, which is raring to go,” Dzeka said.

The incident in Chegutu came at a time when there are rising political tensions ahead of the 2023 polls, with analysts predicting violent campaigns.

Zimbabwe has a history of violent elections, with the 2008 polls being one of the bloodiest, resulting in the late opposition leader Morgan Tsvangirai boycotting the run-off election in protest.

On Friday, CCC deputy president Tendai Biti escaped death by a whisker after he was attacked by suspected Zanu PF activists in Mashonaland Central.

Ahead of the March 26 by-elections, the CCC had a number of its rallies either cancelled or disrupted to tilt the electoral playing field against the opposition.

Meanwhile, a survey released by Afrobarometer last week revealed that if presidential elections were to be held today, Mnangagwa would lose to Chamisa.

The survey showed that 33% of respondents would vote for Chamisa against Mnangagwa’s 30%.