Defiant Chamisa lashes out at ED… as thousands defy police

They fought running battles with police all day and Chamisa, who arrived in Gokwe just after 3pm, was forced to have a walk-around the town with hundreds of party supporters following him in defiance of the police clamdpdown.

They fought running battles with police all day and Chamisa, who arrived in Gokwe just after 3pm, was forced to have a walk-around the town with hundreds of party supporters following him in defiance of the police clamdpdown.

Chamisa was accompanied by his deputy Tendai Biti, among other senior party officials.

He was mobbed by masses of party supporters, resulting in the closure of a Metro Peech and Browne wholesaler shops where he went to buy a bottle of water.

Police had earlier teargassed jubilant CCC supporters, who were waiting for Chamisa outside the wholesale shops.

Chamisa was in Gokwe town to address a scheduled campaign rally ahead of the March 26 by-elections.

But heavily-armed police with water cannons camped at Gokwe centre to prevent the rally from going ahead. Police claimed they did not have enough manpower to monitor the rally because other officers had been deployed to Kwekwe for a Zanu PF star rally addressed by President Emmerson Mnangagwa. 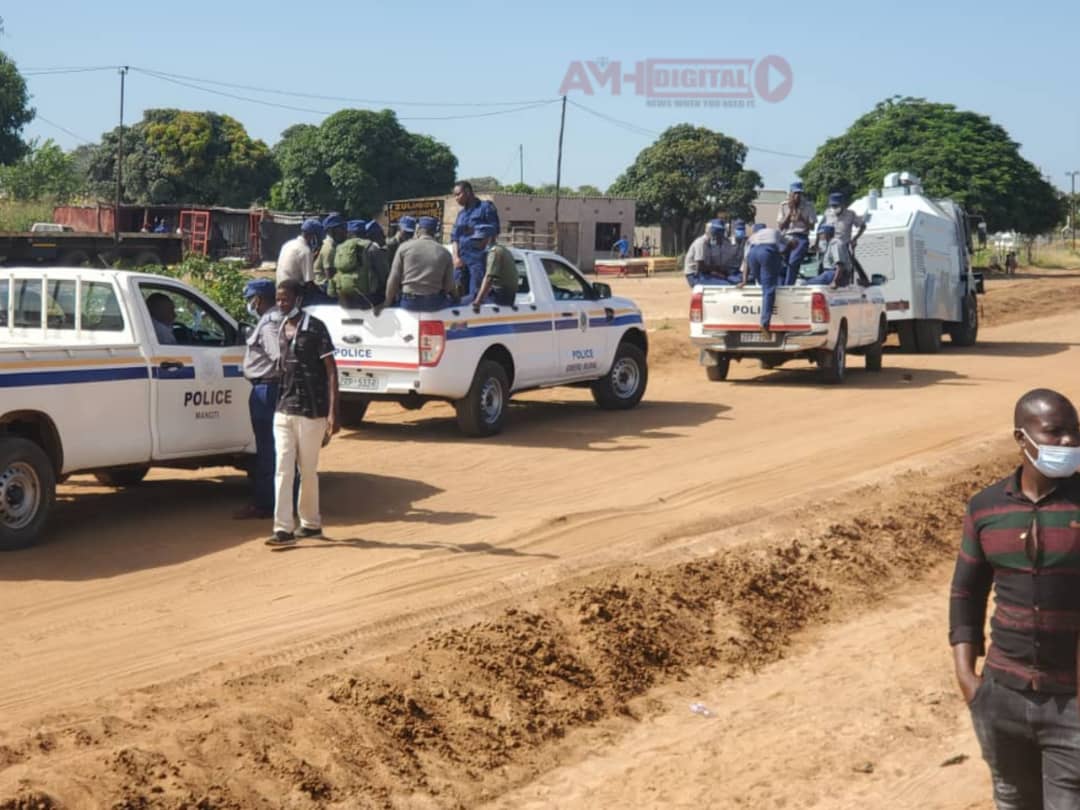 “So low! But why? We were the first to notify the police about our Kwekwe and Gokwe rallies,” he tweeted.

“ED (Mnangagwa) countered by provocatively and arrogantly pencilling his rally for Kwekwe. We don’t accept bullying!!

“We had no single policeman in Highfield or at any of our previous rallies. Our rallies are not covered by police.”

So low! But Why?? We were the first once to notify the police about our Kwekwe and Gokwe rallies. ED countered by provocatively and arrogantly penciling his rally for Kwekwe. We don’t accept bullying!! https://t.co/j6EINBu5Gh

“Police are only for Zanu PF. They don’t have police to cover the rally, but they have police and arsenal to block us.”

Kwekwe is nearly 140 kilometres away from Gokwe.

Last week, Chamisa had a rally in Harare while Mnangagwa was addressing his party supporters about 75km away in Marondera.

“Zanu PF is holding a rally in Kwekwe today (yesterday) and we were supposed to have our CCC by-election campaign launch here in Gokwe.

“Zanu PF feared that their rally in Kwekwe would be a flop while ours would have bumper crowds,” CCC national organising secretary Amos Chibaya told The Standard in an interview.

“We were confident that we were going to have four times their number even though we did not bus people to the venue.”

Chibaya said the CCC would reschedule the rally.

Gift Ostallos Siziba, CCC deputy spokesperson added: “Police barricaded all roads to Gokwe, but people in Gokwe are ready for their president.

“Our programme was stopped by the police, but we salute the people of Gokwe.”

Documents seen by The Standard show that Gokwe South District was given 10 Zupco buses to ferry Zanu PF supporters from the town to Kwekwe for a Zanu PF rally.

But a few supporters turned up, prompting Zanu PF to force people into the buses.

One popular CCC supporter Madzibaba Veshanduko, as he is popularly known among CCC supporters, said: “As CCC supporters we are disappointed by Zanu PF and the entire system for their ruthless behaviour of using the poor police to attack non-violent people.”

Although the High Court had granted the CCC the greenlight to proceed with their rally, police came in full force to stop the event. 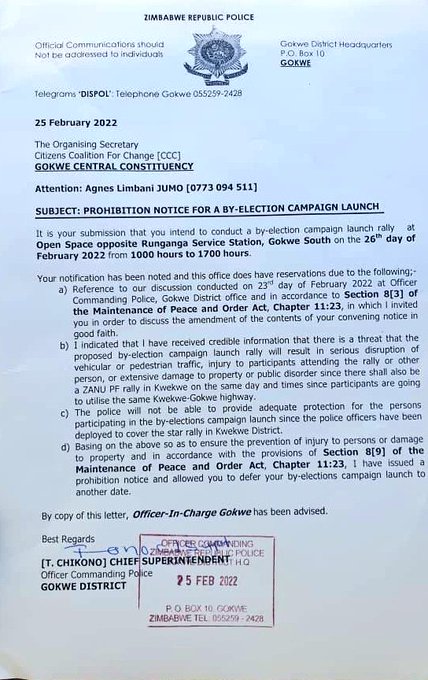 According to CCC supporters, Gokwe police station has one car, but they were surprised to see Gweru police vehicles in Gokwe.

In preparation for the CCC rally on Thursday and Friday, several CCC supporters were beaten by Zanu PF supporters at Mapfumo, Gawa and Nyaradza shopping Centres for putting up CCC posters.

CCC had notified Gokwe Central police of their rally on February 22, but a follow-up communication from the law enforcement agency claimed that they had manpower shortages and the event had to be called off.

“The police will not be able to provide adequate protection for the persons participating in the by-election campaign launch since the police officers will be deployed to cover the star rally in Kwekwe district,” police said.