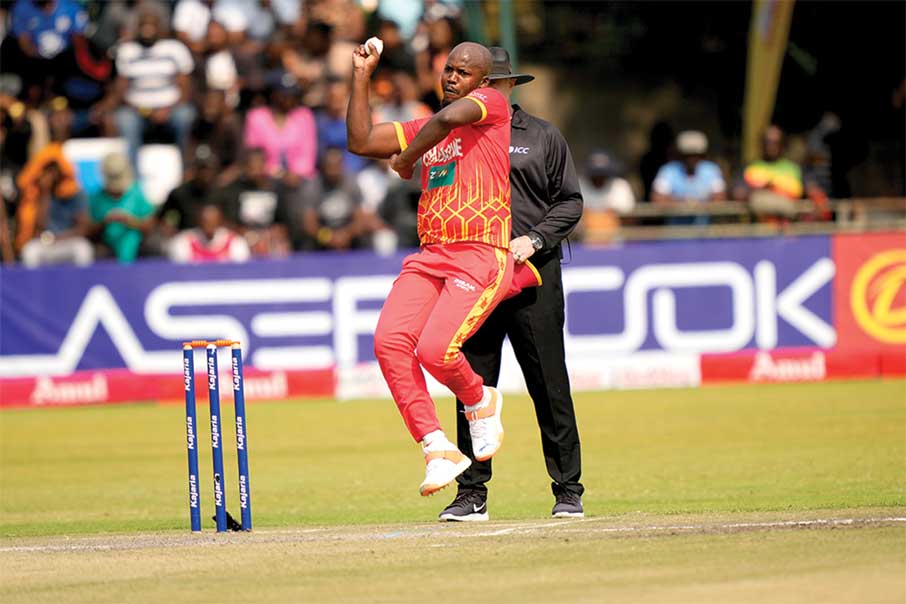 The result meant that India took the series with a game to spare after their 10-wicket victory in the first ODI on Thursday.

ZIMBABWE’S batting frailties were on the spotlight once again as Indian won the second of the three match One Day International (ODI) series by five wickets despite the hosts’spirited fight with the ball out Harare Sports Club yesterday.

The result meant that India took the series with a game to spare after their 10-wicket victory in the first ODI on Thursday.

It was fast bowler Shardul Thakur, who caused a lot of problems for the hosts after grabbing three wickets who went on to set a low target of 162.

Former Zimbabwe captain Sean Williams and unbeaten Ryan Burl were the only batsmen to offer resistance to the Indian attack, scoring 42 and 39 respectively.

And yet again it was the top order that failed to put up a solid foundation as the opening partnership of Innocent Kaia and Takudzwanashe Kaitano, who replaced Tadiwanashe Marumani, contributed just 20 runs before the latter was removed by Mohammed Sira for just seven runs.

Soon Zimbabwe were 39 for four after losing the wickets of Kaia (16), captain Regis Chakabva (2) and Wesley Madhevere (2) in quick succession.

Williams and Sikandar Raza, who was enjoying some form before India’s tour to Zimbabwe, looked set to pluck Zimbabwe out of the mess with 41-run fifth wicket partnership but Raza fell cheaply as he top edged the ball to Ishan Kishan off the bowling of Kuldeep Yadav for 16.

Williams, who averaged a run a ball in his stand including a six and three fours was the next to go caught by Shikhar Dhawan at deep backward square leg attempting a slog sweep off the bowling of Deepak Hooda leaving Zimbabwe on 105 for 6

Burl was slightly less brisk, facing 47 balls, but also struck a six and three fours at Harare Sports Club as he ran out of partners.

Buoyed by a vocal crowd, Zimbabwean bowlers were supercharged to defend the low score as Victor Nyauchi struck early for the hosts grabbing the big wicket of K L Rahul with just five runs on the board.

Tanaka Chavhanga, who did not play in the first ODI, dismissed danger man on Dhawan for 33 before Luke Jongwe who recorded figures of two for 33 got in on the act with wickets of Shubman Gill and Ishan Kishan.

India looked in a spot of bother at 97 for four and would only lose one more wicket on their way to wrapping up the series as Sanju Samson’s unbeaten 43 was enough to earn him a player of the match accolade.

In the first ODI Zimbabwe could only manage 189 runs on the scoreboard.

“We had a really good fight in the field. We’ve struggled to pick early wickets in the last few games and we did that today. We fell short of runs on the board. Our execution lacked a little bit in the end, and we’re looking to score more runs. The bowlers came out charging and they tried to hit their lengths,” he said.

The final ODI is scheduled for Monday at the same venue.