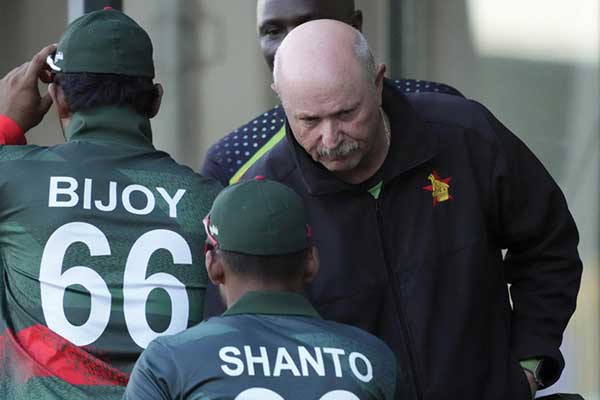 Showing no signs of nerves or apprehension, the Chevrons claimed a rare sweep of both the T20I and ODI series over Bangladesh recently as they reaped the benefits of a fearless approach which has been Houghton’s mantra since his appointment as head coach in June.

BY DANIEL NHAKANISO ZIMBABWE cricket team head coach Dave Houghton says his confident side will maintain their fearless approach which worked during their series win against Bangladesh, when they tackle a strong India side in a three-match One Day International Series which gets underway at Harare Sports Club on Thursday.

Showing no signs of nerves or apprehension, the Chevrons claimed a rare sweep of both the T20I and ODI series over Bangladesh recently as they reaped the benefits of a fearless approach which has been Houghton’s mantra since his appointment as head coach in June.

Houghton said while he is happy with the team’s progress, he believes that if his players continue to play fearless cricket, they have the potential to put up a strong fight against India in the three ODIs which are part of the Cricket World Cup Super League.

“The biggest thing for me is that we have to go out there with the belief that we can win. That’s a change we have made over the last few months and hopefully they will continue to believe and come out like that against India. If they do, we will play well and can put up a serious contest against the Indian side” Houghton said in a wide ranging interview with the Indian publication Sportstar.

“Before we dispersed for a few days after (the last game), I told the boys in the dressing room that India coming here is a good opportunity for us to really score and get good results against one of the best sides in the world,” “I told them that, I want us to believe that we aren’t here just to add up to the numbers and watch India play really good cricket, but we are here to challenge. I am hoping in these three games, we can challenge India really hard,” he added.

Houghton said he has been impressed by how his team’s bowling department has developed but admitted that while the batting department had done well during the Bangladesh series, the top order batting lineup remains an area of concern.

“We are not happy with the starts we are getting and that’s one of the areas I would like to work on, especially with our top-order batters. Also, we have been hamstrung by a few injuries and are missing some seniors like Sean Williams, Craig Ervine. It’s not that the youngsters don’t have the skills to replace them, but it’s just that they don’t have that experience. So, I am trying to see if we can get a better top-order start. Our bowling and fielding against Bangladesh have been exceptional, and I am happy with those two departments,’ he said.

Speaking on the form of star man Sikandar Raza he added: “Obviously having somebody like Raza in the form that he has been is amazing. You also put together with that because having one player in that sort of form brings courage to the rest of the team.

“You suddenly get Innocent Kaia scoring a great hundred and then Regis Chakabva gets his first ODI hundred in the next match and that’s a good innings I have seen from anybody in this country,” Houghton concluded.

Meanwhile the Indian side which is captained by KL Rahul in the absence of regular skipper Rohit Sharma was expected to arrive in the country last night.

The India side will be coached by legend VVS Laxman during the series after Rahul Dravid was given some time off ahead of the upcoming Asia Cup.