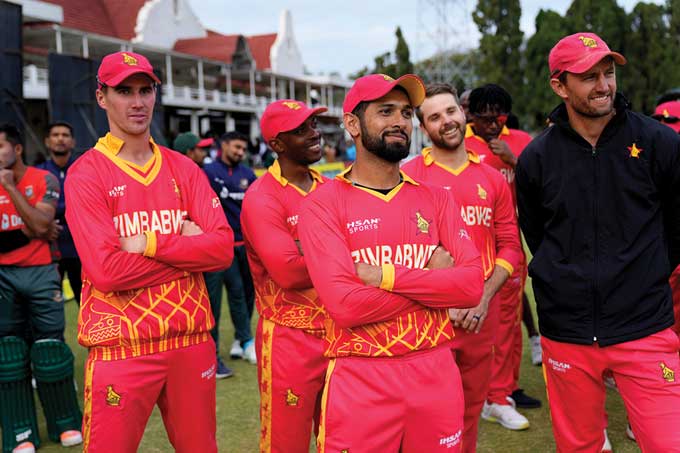 After clinching a 2-1 win in the three-match Twenty20 International (T20I) against Bangladesh last week, the Chevrons are on the brink of completing a famous double against the same opponents.

BY DANIEL NHAKANISO THE Zimbabwe cricket team will be looking to end their five-year wait for a One-Day International (ODI) series against an ICC Full Member nation when they take on visiting Bangladesh in the second ODI at Harare Sports Club today.

After clinching a 2-1 win in the three-match Twenty20 International (T20I) against Bangladesh last week, the Chevrons are on the brink of completing a famous double against the same opponents.

The Dave Houghton-coached side took a 1-0 lead in the three match ODI series after successfully chasing a winning 304 runs to seal a five wicket win in the first ODI on Friday.

And another victory in the second one-day, which is expected to be watched by a full house at the same venue this afternoon will see Zimbabwe taking an unassailable 2-0 lead.

Zimbabwe last won an ODI series against an ICC full member nation in 2017 when they stunned Sri Lanka 3-2 in a five match series away from home.

Since the historic series win in Sri Lanka, Zimbabwe’s only other ODI series success came three years ago when they beat minnows United Arab Emirates 4-0 at Harare Sports Club.

They have lost 12 series and drew against Ireland last year.

The streak includes successive 3-0 series losses to Bangladesh away in 2018 and 2019 and at home last year.

In total, since May 2013 when they won 2-1 in a three match series at Queens Sports Club in Bulawayo, Zimbabwe have lost their last five successive bilateral ODIs and were winless in 19 consecutive ODIs before ending the streak on Friday.

After finally ending the streak they will be confident of going a step further by winning the series and they will have their first opportunity today.

Zimbabwe’s match winner in the previous ODI Sikandar said the hosts’ dressing room squad is currently in a positive mental space, which he credited to the influence of head coach Dave Houghton and batting coach Lance Klusener.

“When he speaks, it is very substantial, it’s very heavy and it’s to the point. I think when he speaks he only speaks for a little while, but it holds a lot of meaning and the team buys into what he is saying. There is lot of respect towards our coach and there is lot of love giving back to the team. The dressing room is in very good mental space and that’s why these things happen,” Raza said.

“Dave is very clear that it is not our XI players that win us the game, but it’s the whole squad. So when you replace somebody it’s because you possess the same quality as the other guy and you believe in yourself.”

Raza was also full of praise for Innocent Kaia, who struck his maiden hundred in only his fourth ODI.

“I thought Inno (Innocent) was special today. Lance Klusener is very big on one thing and that is to put the team on a position and so Luke Jongwe can come and do what he is assigned to do (finishing role). So when Inno and I were batting, we said you know this is our role and we should fulfill it so that (Ryan) Burl and Milton (Shumba) and power hitters can execute their roles when they come in. They shouldn’t have to do our roles. So that whole mentality came from Lance,” he said.

After smashing centuries to inspire Zimbabwe to victory in the opening ODI, the duo of Raza and Kaia are expected to play another important role for the hosts as they go out in search of a rare series victory in the 50-overs format.

However, the hosts will be eager for their top order batting department to deliver after the trio of stand-in skipper Regis Chakabva, Tarisai Musakanda and Wessley Madhevere missed out on big scores on a good batting wicket.

With the duo of Blessing Muzarabani and Tendai Chatara still unavailable due to injuries, Zimbabwe are likely to stick with the new ball pairing of Richard Ngarava and Victor Nyauchi.

However, big hitter Burl is doubtful for today’s match after suffering a shoulder injury while bowling on Friday, potentially joining the long list of injury absentees which also includes skipper Craig Ervine.

Burl, who was the match winner in the T20 decider last week, was scheduled to undergo a scan yesterday.