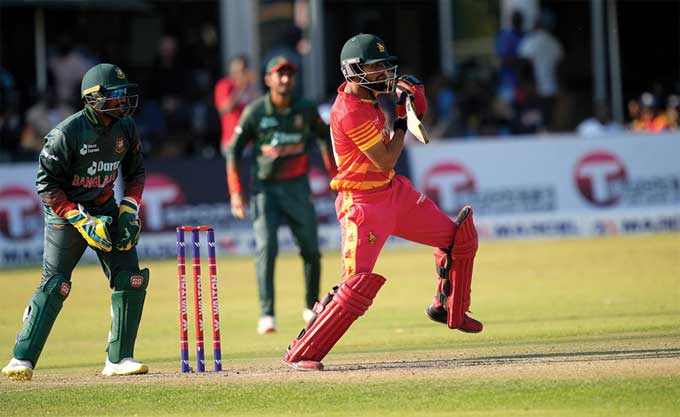 Raza has grown in stature since making his ODI debut against Bangladesh on May 3, 2013 and is now firmly on his way to becoming a Zimbabwean legend having represented the country in 17 Tests, 115 ODIs and 58 Twenty20 Internationals and scoring almost 6000 runs across all formats.

BY DANIEL NHAKANISO A FAILED eye test might have dashed his childhood dream of becoming a fighter pilot for the Pakistan Air Force but Sikandar Raza continues to draw inspiration from his experience in his current role as the batting stalwart of the Zimbabwe cricket team.

Born in Pakistan’s north-eastern city of Sialkot, Raza spent over three years at the Pakistan Air Force boarding school in Lower Topa with the goal of becoming a fighter pilot, before failing a highly particular vision test.

Raza went on to study for a degree in software engineering at the Glasgow Caledonian University where he realised his potential as a cricketer.

Raza has grown in stature since making his ODI debut against Bangladesh on May 3, 2013 and is now firmly on his way to becoming a Zimbabwean legend having represented the country in 17 Tests, 115 ODIs and 58 Twenty20 Internationals and scoring almost 6000 runs across all formats.

On Friday, Raza further enhanced his status as one of the country’s finest players of his generation after scoring an unbeaten 135 as Zimbabwe successfully chased a target of 304 runs to finally end their 19-match winless streak against Bangladesh.

In his latest heroic performance Raza remarkably played through the pain barrier to rescue Zimbabwe from 62 for three in the 14th over to steer the home side to victory.

And afterwards he reflected on his time at the Pakistan Air Force School and how it prepared him to be able to handle any pressure situations.

“Of course, it helps that I am from an Air Force background. We don’t give up. I get hit; I get hurt, broken fingers, toes, etc. I don’t care. I personally feel it helps spending the three-and-a-half years in PAF (Pakistan Air Force) college. I will always be a fighter within myself. I couldn’t become a fighter pilot. But I think as a person, I will always be a fighter. The training mentally and physically is paying dividends now.”

Raza was limping in some periods during his innings after he hit the inside part of his knee while attempting a pull shot.

While he could have decided to retire hurt, instead he decided to soldier on which ultimately paid off after sharing a record fourth wicket partnership with Innocent Kaia to inspire the team to a famous victory.

“When I pulled the ball I had an inside edge and it went on to the inside of my knee, which has no padding. It was tough at that point but the way I felt at that moment, the momentum was starting to shift towards us. Because we played such a young side, Innocent was batting so well and I didn’t want a new partner to start again and I was also thinking, if I have to come back in the next 30 to 40 minutes I have to start again. So all I wanted was to buy my time out there through the pain. So the first 30 minutes was tough but it healed well in the end,” Raza said.

Raza shared a fourth wicket stand of 192 runs with Kaia who scored (110 off 122balls), which is the third-highest ever for Zimbabwe in ODIs.

Hamilton Masakadza and Raza himself hold the record for the highest stand (224 runs) against Afghanistan in 2014.

Even when Kaia was eventually dismissed for 110, Zimbabwe were well on course to seal the game. Raza remained unbeaten on 135 as Zimbabwe registered a memorable win which ended a run of 19 successive defeats for the Chevrons against Bangladesh.

This was their third highest run chase, with the top one coming 11 years ago against New Zealand in Bulawayo.

This was also their second ODI win in 2022, having beat Sri Lanka in Pallekele in January this year.

And today they could make more history with another win in the second ODI at Harare Sports Club.