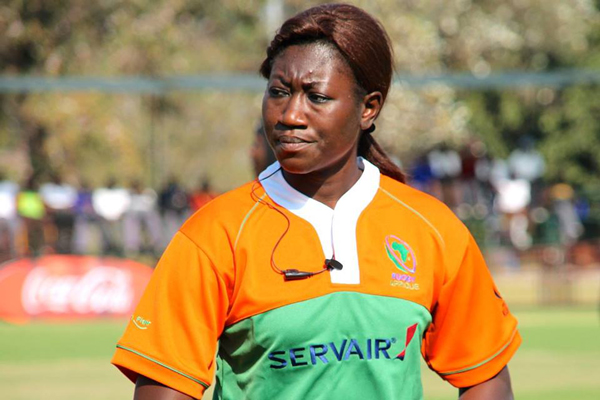 This year’s Rugby Africa Cup will double as the final qualifying tournament for the 2023 Rugby World Cup Africa which will also be played in France.

BY DANIEL NHAKANISO TOP Zimbabwean female rugby referee Precious Pazani has been named amongst a group of 13 elite match officials who will officiate at the 2022 Men’s Rugby Africa Cup slated for July 1-10 in Aix-en-Provence and Marseille, France.

This year’s Rugby Africa Cup will double as the final qualifying tournament for the 2023 Rugby World Cup Africa which will also be played in France.

Pazani, whose career has been on a steady rise over the last few years, is the only female official announced by World Rugby yesterday as she continues to edge closer to realising her dream of becoming the first local referee to feature at the World Cup.

She is joined by fellow gifted Zimbabwean rugby referee Talent Gandiwa on the list which features 13 officials from 12 countries — six of them from Africa.

In addition to the duo of Pazani and Gandiwa, the other African referees on the panel are Sylvain Mane (Senegal), Aymen Jriji (Tunisia), Victor Ojuku (Kenya) and Namibian Nicardo Pienaar.

Selection for the pinnacle tournament in African rugby follows a comprehensive review of match official’s performances over a period of time and features an exciting blend of youth and experience.

The duo of Pazani and Gandiwa will serve as the assistant referees to Mane in the quarterfinal match pitting favourites Namibia and Burkina Faso with Grenouillet tasked with the television match official (TMO) duties.

Praderie from France will handle the Sables’ quarterfinal match against Ivory Coast on July 2 with Jriji and Ojuku as his assistants.

The appointments of the Zimbabwean duo of Pazani and Gandiwa for the upcoming Rugby Africa Cup are an endorsement of the quality of match officials being produced by the Zimbabwe Rugby Referees Society.

For Pazani, it is yet another reminder of the big strides she has been making in her career since crossing over from basketball to rugby, where she played for Zimbabwe in Women’s Rugby Sevens before venturing into refereeing in 2014.

Early this year, Pazani was appointed by World Rugby for the men’s Under-20 Six Nations Championship played in March in Europe while she is also set to officiate at the World Rugby Sevens Challenger Series to be played in Chile in August.

The Lomagundi College sports coach is the only match official from the African continent appointed for the tournament. Others are from Argentina, Brazil, Canada, Hong Kong, Fiji, Singapore and United States of America.