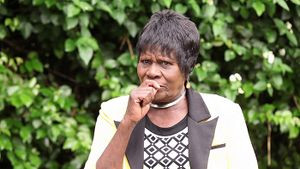 ON a chilly Sunday morning of June 24, 1984 a voice, supposedly from God stretched to an OK supermarket employee on duty. The word was clear, ‘Today you are quitting your job of 15 years and start ministering for the Lord’.

The word further instructed her to quit music and acting which had brought her fame in the then Rhodesia.

“It was scary when I heard the voice talk to me and the person in me. It was an experience that I had never had before as I was used to my way of life that revolved around acting and music,” she said.

That was to be the end of Susan Chenjerai’s arts career which spanned two decades as she went into ministering and subsequently marrying a cleric Lovemore Mobate.

Known for her role as Mai Rwizi in sitcom Mhuri YekwaMukadota, Chenjerai and her husband Mukadota, real name Safirio Madzikatire became real life caricature of both characters and made their roles look real, up until today.

Mai Rwizi played a calm, respectful wife to a notorious Mukadota. Mukadota would wreak havoc in the community and still get away with it through the support he received from his wife.

Her acting career began in 1951 as a member of the Bantu actors, a group of artistes from Mbare that started in 1936. She later joined the Marandellas Bush Babies in 1958.

Madzikatire approached Chenjerai and persuaded her to join his band in 1969, after listening to her singing in the Majubeki area of Mbare. They released several hit songs before coming up with scripts for the Mukadota series, which marked the beginning of her acting journey.

“When I quit the arts, Madzikatire welcomed my decision and supported my new venture and way of life.

"By July I was free from everything, my daily job and acting. I then took up ministering with my husband who was a pastor,” she said.

Chenjerai was saved in 1970 and married to a pastor. She and her husband started preaching, from the day she received a calling and quit her job she dedicated her life to ministry. She and her late husband headed the New Gospel Church of God.

Currently she is the leader of the church with branches in Banket, Mozambique, Mbare, Mutorashanga, Centenary and South Africa.

Chenjerai described her days in the arts industry as worldly and ‘dark’ days.

“Life in the acting and music industry was scary. If I am to give a testimony of my life you will know that God surely loves me and he took me out of darkness and I will never go back there,” she said.

“I am a new creature now and I thank God that I quit on time. By now, maybe I would have died earlier with others,” she said.

All her church branches are using rented premises and she is appealing for help from well-wishers to acquire a permanent home.

Chenjerai revealed that she never gained anything materialistic throughout her 20-year acting career despite filling up venues with Madzikatire’s band and also producing a hit sitcom that took the small screen by storm.

“We used to fill up venues, but I had nothing to show  from my arts career yet my fellow artists have houses and cars whilst I own nothing," she said.

“Madzikatire grew up here (Mbare) but later relocated to Cranborne.

“All the benefits of the music and acting we made together were channelled to his family. I didn’t get anything.

“I was left without even a car while his children own houses and the house I live in now is my husband’s.”

Chenjerai was more than an actress and musician. She is the one behind the hit song KwaHunyani which was later performed by Madzikatire and Katarina.

“I am the one who wrote the song KwaHunyani which later was recorded and performed by Madzikatire and Katarina,” she said.

“I am also behind the song (Vana Mai Vanofara)…………… which was performed by Thomas Mapfumo.

“There are many songs that I composed, but were taken up by other artistes and went on to be hit songs.”

The 82-year-old said she does not regret anything, but thank  God for saving her from the ‘world’. She has five surviving children and 65 grandchildren.