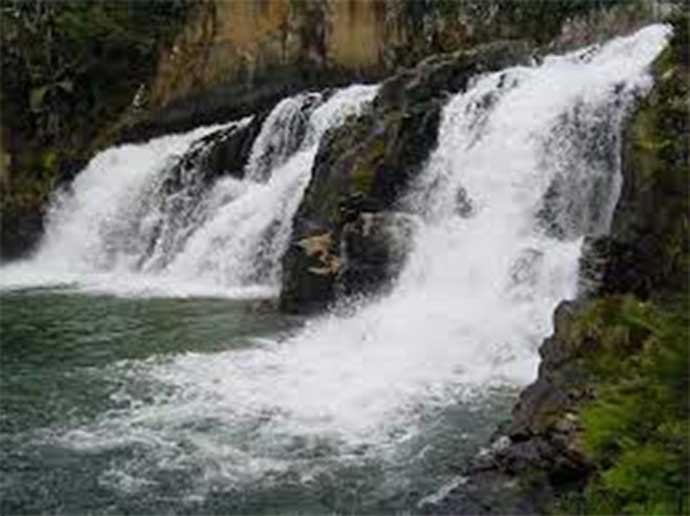 The name Gandavaroyi loosely translated means “throwing witches into a (plunge) pool”. It is said that the falls were used as a litmus test for suspected witches and wizards,  who thrown into an estimated 50m deep gorge.

By Burzil Dube A ROSE by any other name will always remain smelling sweet, so goes an old adage. The expression somehow boggles Yours Truly’s mind, especially on use and applications of eponyms as this week we explore Gandavaroyi Falls in Gokwe North, Midlands province.

However, before delving into this mystical Gandavaroyi Falls issue, Yours Truly revisits the previous travelling and touring columns where some “investigations” were executed on how some names in Matabeleland North province came into being.

What quickly come into mind are places such as Lupane, Jotsholo, Nkayi and Mosi-oa-Tunya, among others whose origins are traced to Tonga tribesmen who are believed to have been among pioneer inhabitants within this particular province.

Lupane, originated from “tupane” meaning “let’s give each other land” while Jotsholo was related to some form of sexually transmitted disease.

This rather strange or funny name, even most locals are not in the loop on how the naming came about.

Back to the legendary Gandavaroyi issue!

The name Gandavaroyi loosely translated means “throwing witches into a (plunge) pool”. It is said that the falls were used as a litmus test for suspected witches and wizards,  who thrown into an estimated 50m deep gorge.

If they were indeed witches they would never be seen again, hence the name Gandavaroyi.

Although such a practice was halted hundreds of years ago, the place is still associated with mystery and it is believed that spirits of those who perished in this natural guillotine still roam the area, causing unexplained disappearances, among other issues.

This interesting information was provided courtesy of Justin Salani, a tourism enthusiast based in the Lowveld region and whose crusade in travelling and touring is second to none.

Yours Truly had in the past tried to get hold of senior officials within one of the rural district councils whose sphere of influence also includes Gandavaroyi, but all was in vain, which is somehow detrimental to tourism promotional initiatives.

Thanks to Salani, his input came in the nick of time. This place is a must visit barring any esoteric circumstances similar to those encountered at Mount Inyangani in Manicaland province.

Yours Truly wishes  that most rural district councils emulate the likes of the Binga local authority, which is always accessible with information as far as tourism and hospitality is concerned hence its quest to be accorded town status while others are in hibernation.

Kudos to Joshua Muzamba, Binga Rural District Council CEO, who is always amenable with information on such issues!

The Gandavaroyi Falls are situated about 100km from Nembudziya shopping centre in the Gumunyu area sandwiched between Batanai, Bhashungwe of Hurungwe district on the Sanyati River.  The place is accessible either through Hurungwe or Nembudziya business centre.

While most of Zimbabwe’s rivers are usually characterised by alluring geomorphologic features the Sanyati River is no exception where Gandavaroyi Falls are situated in the northern edge of Gokwe district.

The falls form the biggest drop on the river with its massive crater surrounded by steep cliffs providing picturesque scenery.

The falling water comes from a high elevation into a plunge pool where it is temporarily stored before disappearing into underground tunnels to emerge on the other side via connecting streams giving the place a spectacular grandeur.

Despite all sorts of talk associated with mystery, the place is slowly proving to be a force to reckon within the Midlands tourism industry and it is a matter of time before it competes with the likes of Chirorodziva at Chinhoyi Caves situated in the adjacent Mashonaland West province.

More on Chirorodziva in forthcoming travelling and touring columns, Chirorodziva’s spectre is more or less similar to Gandavaroyi Falls.

Legend has it that Sanyati River narrows towards the falls where it appears as if there is a sinkhole and water spirals downwards.

It is believed that the pools below are extremely deep even in seasons when the river is at its lowest capacity and nothing changes in terms of depth.

Gandavaroyi is also accessible from Hurungwe area where one drives through Magunje heading towards Chidamoyo Christian Hospital facing Sanyati River, thus passing through Nyamufarira village, which is directly opposite Gandavaroyi business centre.

Besides visiting the mystic falls, activities along Sanyati River include photographic safari, bush walks, fishing and bird watching, among others that complement a tour of the forgotten Gandavaroyi Falls.

Meanwhile, Yours Truly is on the prowl hunting for more information concerning some place popularly known as “Ruware RwaMakate” and its mysterious stuck hoe in Mutoko, Mashonaland East province.

If there is anyone with more information concerning this very important tourist hanging fruit, engage me.