To or not to deduct Aids Levy from VAT in Zim 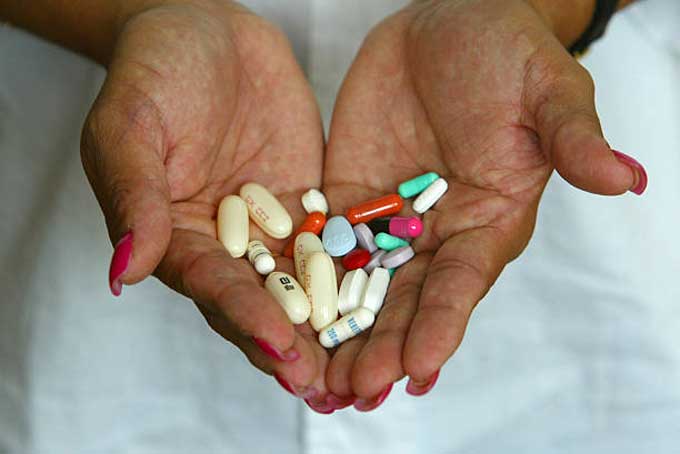 By Michael Gwarisa Rabson Mandizha* (45) is a carpenter and entrepreneur at Kuwadzana Home Industries in Harare. In 2012, he tested positive for HIV and was initiated on antiretroviral therapy (ART).

Every month, he gets his ART supply consistently from Kuwadzana Polyclinic and is grateful to the government and its partners for giving him a chance to live a healthy life.

He has four Children with his wife, who is also HIV positive and thanks to the national prevention of mother transmission of HIV (PMTCT) programme, none of his children including one whom they had after he had tested positive was born with HIV.

“My wife and I both look healthy and our children are HIV-free. We take our medications consistently and on time every day to remain this healthy.”

Every month, Rabson makes not less than US$1 000 and manages to invest back in his business without any hustles.

There are many people like Rabson whose lives have greatly changed owing to the country’s successful national ART programme.

Because he is not formally employed, Rabson cannot contribute to the Aids Levy, which is Zimbabwe’s domestic model of financing HIV treatment.

Established by legislation in 1999, the Aids Levy entails a 3% income tax for formally employed individuals and 3% tax on profits of employers and trusts (which excluded the mining industry until 2015).

The Aids Levy is managed by the the National Aids Council (NAC). It’s collected by the Zimbabwe Revenue Authority (Zimra) and disbursed directly to the NAC on a monthly basis.

ART in Zimbabwe is procured from proceeds from the Aids Levy and also funding from donor partners such as The Global Fund.

Currently, the Aids Levy is being collected from the formal sector and registered employees. At the moment The Global Fund supports about 700 000 people who are on ART whereas government through NAC and the Aids Levy supports only 100 000.

Because Zimbabwe has high levels of informality, the sustainability of the Aids Levy is greatly affected.

This in turn has narrowed the tax base, thereby leading to a decline in Aids levy collections over the years.

According to NAC, Aids Levy collections have been decreasing over the years. From 2009 up to 2018 during the multicurrency system, NAC used US$63 million to procure ARVs from foreign suppliers.

The Aids Levy trend, since dollarisation in 2009 to the year 2016 shows a declining trajectory.

However, with the current collections being done in local currency terms, the future for people living with HIV and on ART hangs in limbo if no new Aids Levy collection models are devised.

According to NAC’s accounting officer Godfrey Mzari, collections to the Aids Levy have been on a downward trend since 2014 and in 2021, NAC collected over $1 billion from the $885 million they had targeted for in 2020.

However, converted to foreign currency, the figure wasn’t much.

Health economists believe there is need to consider deducting the Aids  Levy from consumptive taxes such Value Added Tax (VAT).

Development Economist professor Prosper Chitambara said introducing VAT-based Aids Levy was commendable and an option worth exploring notwithstanding the fact that the country is already heavily tax burdened.

“Obviously, it makes economic sense to do that, to deduct the Aids Levy from VAT,” Chitambara said.

“However, the risk that is there is that it could result in government increasing the VAT which will also have a knock-on effect on pricing across the economy.

“Other countries have introduced this kind of consumptive taxes to finance their health sectors and it then helps to ensure that at least everyone is contributing to the Aids Levy.

“Government slightly reduced VAT from 15% to 14,5%, generally the tax burden in the country is already very high and deducting the Aids Levy from VAT may not find many takers or may be a popular idea.”

He added that there was need to restructure all government expenditure so as to reduce non-productive spending and increase spending on the productive and critical sectors of the economy like healthcare and social services.

Countries that have gone that route and allocated more resources towards fighting HIV and Aids in Africa include Rwanda and Uganda and this has already yielded positive results.

Formalisation of informal business is another way of tapping into the informal sector and ensuring they contribute to the Aids Levy according to Chitambara, but he had his fears and reservations.

“Currently, the tax regime in Zimbabwe is burdensome and there are very little incentives for those in the informal economy to want to formalise,” he said.

“Thus, the issue of informality in Zimbabwe needs to be addressed in a comprehensive and Quid pro quo manner where the policy makers actually announce a cocktail of measures and reforms to incentivise formalisation or to reduce the cost of formalisation.”

Human resources expert Fidelis Tsvangirai said Zimbabwe’s economy was moving towards full-scale informalisation and tapping into VAT for Aids Levy collections was not a bad idea.

“Zimbabwe is highly informalised, therefore, most of the income tax cannot be collected by the government,” Tsvangirai said.

“Since Aids Levy is collected from income tax, much of the required funds cannot be collected effectively or at all.

“A different way of collecting the levy may be required to boost the fund.

“VAT has wide coverage than PAYE as the unemployment rate in Zimbabwe is high.

“This means less people are contributing towards the levy.  Maybe just 30% of the entire population, what then about the other 70%?

“Also, given that the country’s economy is staggering into recession, we are going to have even more unemployment.

“Look at how the black-market rate is skyrocketing with minimal salary increments, pointing to less spending. So, it won’t be sustainable.”

He added that in the spirit of equity and fairness towards access and contribution to health services, VAT was the best option as it gives everyone a chance to contribute to their own healthcare.

“The Aids Levy fund is set up by the government to collect from every working citizen and government’s challenges in formalising the rest of the economy should not negatively affect the person with HIV working in the informal sector,” said Tsvangirai.

“People without HIV equally contribute to the fund despite not having to receive any ARVs themselves.

“Also, if one has HIV and is unemployed, should they not receive any ARVs because they are not contributing? I don’t think it’s workable.

“Also since majority of our population is in the informal sector, this follows to say that very few people in the formal sector are shouldering the tax expense on behalf of everyone.

He added that the Aids Levy can be put on VAT or intermittent tax and a very small percentage can be tagged on each transaction a user makes up to a certain dollar amount.

“Let’s say everyone should contribute $200, every transaction you make whether buying bread, paying school fees etc, the government will take a very small amount, for instance, dollar, until you reach your $200 amount and then from there you no longer pay it,” he said.

“VAT will only affect those businesses or individuals who trade with formalized businesses who either withhold the tax or require a business to have valid tax clearance.

“Informal business can understate their revenues to reduce the tax levied on them, this too will affect the amount collected for Aids Levy if it is tagged together with it.”

On the flip side, levying VAT might result in the increase in VAT levied on basis goods and services because currently VAT is used for something else so for it to accommodate Aids Levy it means it has to increase.

This increase could be a burden to the poor.

An increase in taxes would result in the poor getting poorer; the cost of basic good and services and commodities would be most expensive resulting in them being less competitive on the global market. The country might end up flooded with cheaper imports resulting in boycott of local goods as they would be expensive and the move might also result in low standards of living therefore negatively affecting the gross domestic product.

“Overall, the experience of the United States suggests that increasing reliance on private finance may exacerbate health care expenditure growth, perhaps due to the weak purchasing power of private insurers and individuals against providers,” Tsvangira said.

Meanwhile, other countries have been levying taxes on consumptive products or demerit goods such as such as cigarettes and alcohol and tax is deducted from the VAT that accrues from the sale of these demerit products.

The VAT is then ring-fenced to finance the healthcare sector and the Aids levy.

Zimbabwe has since increased excise duty on alcoholic beverages. In Asia, they have explored and introduced these taxes on consumption of some of these demerit goods.

In Zimbabwe, the informal sector is already contributing to the fiscus through indirect taxing and though other taxes such as presumptive taxes.

However, there is need to tap more into the informalised sector to ensure they contribute more to the fiscus and their healthcare in general.

This can be done through incentivising them by making it easier, less costly and simpler for them to be able to formerly register their business and pay their taxes.